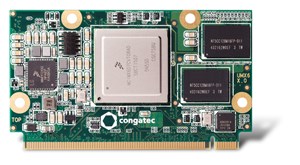 congatec AG, a technology company for embedded computer modules, single board computers (SBCs) and embedded design and manufacturing (EDM) services, is extending its product portfolio for the most popular Qseven standard by now offering Computer-on-Modules in the 40 mm x 70 mm sub-credit-card µQseven format.

The first flagship module of this next generation mini form factor is the conga-UMX6 with ARM Cortex A9-based Freescale i.MX 6 processors. It caters to applications in harsh environments, which require not only compact low-power designs, but also appealing multimedia and computing performance. Applications benefit from the new conga-UMX6 µQseven computer modules’ ARM-consistent, long-term availability of 10+ years, high performance-per-watt with a typical power consumption of just 3.5 watts, plus the extended temperature support of -40°C to +85°C.

The feature set of the new application-ready congatec µQseven modules is perfectly tailored for traffic systems, in-vehicle systems, small size PLCs, parking ticket machines and any other embedded or IoT application that requires a space-saving design and low power consumption.

Users of the new µQseven computer modules benefit from the high level of standardisation and scalability of this form factor, which enables very small and flat designs. In addition, congatec’s extensive documentation, industry-grade driver implementations and experienced personal integration support help OEMs to integrate this processor technology very fast and efficiently into their individual applications. Users already deploying Qseven designs can immediately test the new µQseven modules, thanks to their pin compatibility with Qseven modules.

The feature set in detail

The new conga-UMX6 µQseven modules from congatec are equipped with ARM Cortex A9-based Freescale i.MX 6 SoCs, which boast a long-term availability of at least 10 years and range from 1 GHz single- to dual-core performance plus up to 1 gigabyte of robust soldered memory. With OpenGL ES 1.1/2.0/3.0 and OpenVG 1.1, the integrated high performance graphics support appealing 2D and 3D applications with up to WUXGA resolutions (1920 x 1200). Thanks to hardware-accelerated video processing, the modules decode 1080p videos at 60Hz in real time and encode up to two 720p videos. Two independent displays get connection via 2x LVDS or alternatively via 1x LVDS and 1x HDMI 1.4. The support of the I2S bus ensures jitter-free, high-quality audio transmission. For application and data storage, the module has 1x SATA and an optional 32 GB SSD.

To connect application-specific I/Os, the new congatec µQseven modules provide 1x PCI Express 2.0, 5x USB 2.0, 1x Gbit Ethernet and 1x CAN Bus to the carrier board. The module integrated board management controller offers – amongst other things – watchdog timer and power loss control, as well as support of monitoring, management and maintenance features for distributed IoT installations. Board Support Packages (BSPs) are available for Android and all common Linux distributions as well as Windows Embedded Compact 7. All BSPs are fully released and available for download at congatec’s GIT-server.

Orders can now be placed for the new congatec conga-UMX6 modules as well as an extensive range of accessories to simplify design-ins – i. e. heatsinks, carrierboards and starter kits as well as ADD2 cards and SMART battery management modules.