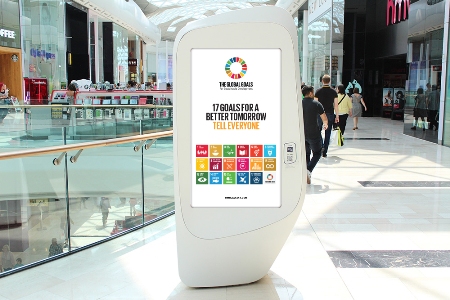 Today at the UN, 193 world leaders will adopt the Global Goals, a series of 17 ambitious goals to end poverty, fight inequality and injustice and tackle climate change for everyone by 2030.

In an unprecedented collaboration, the world’s largest digital and mobile companies are joining the Global Goals campaign along with Project Everyone and Global Citizen, to reach 7 billion people in 7 days with news of the Global Goals.

In the first collaboration of its kind the Global Goals will feature on 18 major digital platforms and internet portals including the Google homepage, Yahoo, The Huffington Post, Twitter, and this site, with a potential reach of up to 2 billion people.

The world’s largest partnership of 26 mobile network operators will send out almost 1 billion text messages and will connect over 4.8 billion customers with a message about the Global Goals.

This comes on the day that the Global Goals campaign rings the Nasdaq Opening Bell in support of the effort to reach 7 billion people in 7 days with news of the Global Goals for Sustainable Development.

An online push by the global digital giants

Other global platforms offering significant support to the campaign include WeTransfer featuring Global Goals content on its homepage, LinkedIn inviting several LinkedIn Influencers to publish long-form posts on LinkedIn about UN Week and Salesforce Foundation recruiting supporters for the campaign. In China, Sina Weibo is getting behind the Dizzy Goals campaign and Youku and Tencent are supporting ‘We the People’ the crowd sourced film.

Jimmy Wales, founder of Wikipedia said, ‘I founded Wikipedia to share the world’s knowledge with every person on the planet. It’s a privilege to now be able to share the most important message of our time: it’s time to change the world’.

Hans Vestberg, president and CEO, Ericsson, said: ‘‘We believe that mobility, broadband and cloud services have the power to transform people’s livelihoods and quality of life. Uniting leaders in the industry to bring the important message of the Global Goals to billions of people demonstrates how technology is such a powerful force for good.”

Speaking about the ground-breaking collaboration, Richard Curtis, founder of Project Everyone said: “The digital world is the definitive example of how we are all connected. It’s collaborations like this that will help us to be the first generation to end extreme poverty, the most determined generation in history to end injustice and inequality, and the last generation to be threatened by climate change.  This is a truly unique opportunity to help change the world and the campaign is calling on all mobile operators to join those who have already signed up to help ‘Tell Everyone’ about the #GlobalGoals. The more people who know about the Global Goals, the more world-changing they will be.”