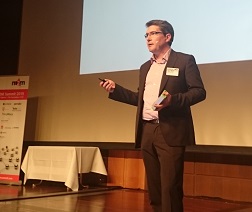 Open source hardware initiatives have emerged to fulfil educational needs. Arduino is maybe the most well-known example. It has been very successful so far, but its reach has been mainly limited to DIYers, teachers and students, or engineers who want to “play with,” discover or showcase a technology. However, truly open source hardware has not been widely used in the industry. But a new kind of open source hardware is now emerging.

What makes a piece of hardware open source? First and foremost, a complete set of documentation (such as schematics and gerbers) is made publicly available, with an open source licence allowing anybody to reuse it, modify it, share it freely and build a new product based on it. The documentation must be comprehensive enough to allow you to reproduce the hardware with minimal effort (send the gerber files to a manufacturer online and get the hardware back within a few days) or to easily modify it for your own purposes.

With this definition in mind, not all “open source hardware” or “open hardware” in the market today is fully open source. For example, Raspberry Pi (more than 5 million units sold so far) offers a proprietary license. While you can use it “as is” to test a technology, you are not allowed to copy it without an agreement with the Raspberry Pi foundation. Because of this, a lot of companies use Raspberry Pi to make demos, but not for actual products. The needs of the industry

The Internet of Things has a pressing need to reduce the daunting complexity of building every piece of an IoT solution — the hardware, the embedded software, communications layer, server and associated software. This requires a variety of engineering skills. And open source hardware, with such big communities, well designed and well tested hardware pieces would be very compelling if they fit the following requirements:

Most available open source hardware options are using a public copyright license, such as the “Creative Commons Share Alike” license, which requires you apply the same license to your resulting product. This is the case for Arduino, mBed HDK, BeagleBoards, Particule (formerly Spark), and Tessel, to name a few. These companies will require payment to reuse their designs to build a non-open-source product for commercial purposes.

The industry needs business-friendly open-source licenses. As an example, Project mangOH (more details below) is released under a “Creative Commons Attribution” license, which comes with no other constraint than to give credit back to the open source project in the documentation. That’s all. You’re free to use the design for your own commercial products.

Most open source hardware platforms are not designed for productisation. Most of the time, they are meant to be used as is, as an open board or perhaps with some basic plastic casing, with wires all around. In general, they fit poorly into an industrial casing.

Expandability is obtained using daughter boards that are stacked onto the product, which complicates the casing design for the end product and prevents any hot-plugging of daughter hardware.

To summarise, although they are great for prototyping a concept, current open source hardware will force you to redesign a new board from scratch if you decide to take the plunge and build your product, not only because of the license as we discussed, but also because of the non-modularity of the design itself, and the lack of industrial-grade components. Project mangOH was born from a reference design provided by Sierra Wireless with a business-friendly open source license (Creative Commons Attribution). It was introduced at the Sierra Wireless Innovation Summit 2015 in Paris.

Project mangOH has been designed with productisation concerns in mind:

The project ecosystem is currently being built around technology providers to provide more IoT connectors, for example  hardware manufacturers, distributors, system integrators, and the developer community. Early adopters are already playing with it – multiple demos on mangOH were on show during the Innovation Summit 2015 in Paris and many developers have already been trained.

In the next phase (towards the end of 2015), manufacturing and the distribution arrangements for mangOH will be set up, including all accessories and IoT boards, so that more new developers can buy and start to play with it.

This blog is published by the author – Thibault Cantegrel, director developer program at Sierra Wireless