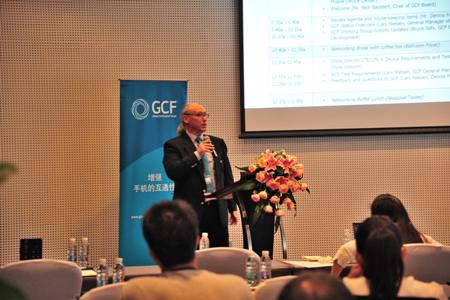 More than 50 delegates from Chinese device manufacturers and mobile operators gathered recently in Xi’An to share their experiences in the fields of device testing and certification.

Hosted by China Unicom, this second annual Global Certification Forum (GCF) China Workshop also explored the complexity of testing LTE-Advanced, the coming challenge of certifying a range of new 5G technologies and certification requirements for machine to machine (M2M) and the Internet of Things (IoT).

Established in 1999, the GCF helps manufacturers to demonstrate that their wirelessly connected devices meet an internationally trusted benchmark of interoperability with multiple mobile networks.  This reduces their cumulative testing costs and increases confidence in product quality. The scheme has evolved in line with mobile technologies and now covers devices based on 3GPP (GSM, EDGE, 3G, LTE, LTE-Advanced) and 3GPP2 (cdma2000) standards. GCF provided delegates with an update on the current status of GCF Certification and reported on the latest priorities of GCF’s main working groups that focus on conformance and interoperability testing, field trials, and CDMA device certification.  Delegates expressed interest in the idea of enhancing the existing GCF Performance Metrics programme as a way of bringing further harmonisation to device testing across the industry.

Ms. Zhou Jing from China Unicom explained the Chinese operator’s requirements for LTE and LTE-Advanced devices and their approach to acceptance testing.  China Unicom’s mobile broadband subscriber base reached 157.79 million at the end of August 2015 and the company’s 4G network includes more than 830,000 base stations offering both FDD and TDD variants of LTE.

GCF also provided an overview of how RCS testing has been incorporated within GCF Certification and how this provides a template for providing an assurance of interoperability for other application layer services such as VoLTE and future IMS-based services.

The workshop also looked into the future and the requirements for testing regimes to support the commercialisation of new 5G standards and technologies.  The Open Interconnect Consortium introduced their mission to define a connectivity framework that is able to offer reliable interoperability for billions of devices on the Internet of Things.

Ms. Hou Yuhua, director of the Mobile Device division of China Unicom Research Institute  said, “As a global organisation focusing on device certification and testing, GCF plays an important role in the mobile industry and helps China Unicom protect its network while providing a good experience to our customers.”

“This second GCF China Workshop had a great response from Chinese manufacturers interested in learning more about how GCF Certification can help them expand their addressable markets by building confidence in their devices among operators worldwide,” said Mr. Lars Nielsen, GCF general manager.