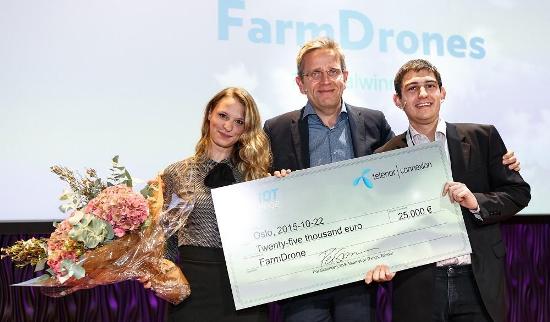 FarmDrones, a connected solution for farmers to increase productivity and crops yield, was awarded €25,000 and six months of guidance and mentoring by the Telenor Advisory Team

Telenor Connexion has announced the winner of the 2015 Nordic IoT Challenge, an initiative to recognise innovation and excellence within the Internet of Things (IoT) arena.

The grand prize winner is FarmDrones, a connected solution for farmers to increase productivity and crops yield. The prize includes €25,000 and six months of guidance and mentoring by the Telenor Advisory Team.

“With a constantly growing population the need for improved productivity and  sustainability within farming and food production is a fact. FarmDrones smart use of new, connected technology and advanced data analytics to transform future farming is not only innovative, but also addressing a critical world challenge,” says Per Simonsen, Senior VP, Internet of Things at Telenor.

The announcement was made at the Digital Winners Conference in Oslo, Norway. FarmDrones, as well as runners-up Minalyze and hidn tempo, gave pitches to leaders in the Internet of Things sector after which the Nordic IoT Challenge Jury awarded FarmDrones the Grand Prize. Minalyze was awarded Second Place with hidn tempo taking Third Place.