Deliveries may be better off grounded, says Colliers International’s report 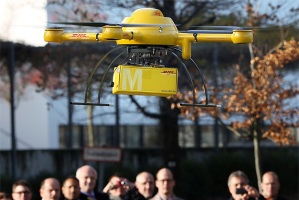 A new report entitled European Retail & Logistics Insights – From Sheds to Shelves, by Colliers International, says that the future of drone deliveries may be at risk due to soaring property costs and calls from the European Commission for tighter regulation.

“Realistically with rising rents and increasing complication of airspace regulation drones may become more trouble than they’re worth,” said Tim Davies, head of EMEA industrial and logistics at Colliers International.

As more sales are conducted online, there is a growing need for local delivery hubs to ship goods to consumers.

Analysis in the report has shown that industrial property has outperformed all other types of commercial real estate. Demand for space from companies like Amazon has seen a reversal of fortunes for the sector with values now rising. Costs for last mile deliveries will be driven by land constraints around cities such as London, where other uses such as housing often receive greater political support.

While property costs make moving goods around more expensive, it is like to be regulation that creates a real barrier for drone deliveries. The European Commission said last year that it wanted further regulation on commercial drones that would apply across the EU.

The announcement specified that further regulation would be needed to prevent issues with safety, privacy and data protection.

Worries around privacy for residents, businesses and public bodies in the flight path of commercial drones carrying recording devices have led to worries around national security and breaches of privacy as well as noise pollution.

With the UK’s digitally literate population set to rise by 48% over the next 25 years retailers will need to work up plans to deal with speedy deliveries across cities. Though with congested roads and increasing regulation surrounding drones, experts at Colliers predict that existing methods will be used such as in-store collection, collection lockers and taxis.

Head of EMEA industrial and logistics, Tim Davies, predicts that increasing anxiety over the place of commercial drones within airspace regulations could scupper plans for a high-tech delivery revolution.

“The report suggests that retailers may instead be looking to better utilise existing modes, such as London’s increasing network of Uber taxies or in-store collection,” explained Paul Souber, head of Central London Retail Agency.

Amazon’s announcement in 2013 that deliveries in selected areas would be carried out by commercial drones from 2015 sparked mass excitement about a deliveries ‘space age’. But as of yet, it hasn’t managed to get off the ground.

Struggling with Digital Transformation? Meet the experts at ‘The Evolving Enterprise’
Read More
320

IoTSWC aims to take connectivity to ‘next level’, including IoT, artificial intelligence and blockchain
Read More
235

Ericsson and Inmarsat sign a strategic agreement that will transform future o...
Next