Home › Blogs › ‘Why the oneM2M standard is so important’: Exclusive interview with InterDigital Solutions EVP 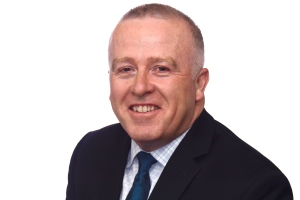 “We see oneM2M as the broadest standard for the services that enable IoT applications”
-Jim Nolan, EVP, InterDigital Solutions

Q. Let’s begin with an overview of your role and responsibilities within InterDigital.

Jim Nolan (JN): Let me start off by introducing InterDigital. Our core business is to design and develop advanced technologies for mobile communications. Since the early 1970’s, our engineers have designed and developed a wide range of 2G, 3G, 4G and IEEE 802-related products and networks.

I previously ran our in-house R&D unit, InterDigital Labs, for 8 years. Since the middle of 2014, I have run InterDigital Solutions which focuses on bringing our technology to market. We do this by offering specialist R&D services to other companies and by developing commercial technology solutions within InterDigital. We are also active in creating new businesses where we see commercial opportunities to create greater value by joining the capabilities of our technology specialists with external entrepreneurs.

Q. InterDigital has a strong reputation for innovation in the cellular technology arena. How did the company get involved with the IoT?

JN: Around 2009, we explored what the next-generation wireless landscape would look like and we identified three, tightly coupled possibilities. The first of these applies to new developments in next-generation networks (NGN). Secondly, we felt that the projected growth in digital media would drive content and traffic loads on these networks. And thirdly, we could see that IoT would drive the number of devices on networks. While many of these applications involve small amounts of data traffic, we took the view that all of these connected devices would increase the signaling load on networks quite significantly. It made sense to focus our efforts on these three self-reinforcing areas that would drive the next generation wireless networks.

The IoT, we believe is just the next step in the evolution of the Internet. It’s going to require a new set of Internet protocols for ‘things’. When we were looking at the next-generation wireless landscape, most of the M2M initiatives focused on proprietary, non-standard approaches within a few verticals. InterDigital decided to take a broader view of the market opportunity. We concentrated our efforts on standards-based solutions and the suite of (horizontal) services necessary to enable multiple IoT applications across multiple verticals. This is the main reason for our involvement in oneM2M.

Q. oneM2M recently issued its Release 1 specifications. How do you view the standard and its progress?

JN: Our work in IoT standards started with some early work within ETSI TC M2M group that focused on metering applications. This was a good start but somewhat narrow in scope. Once other worldwide standards organisations joined efforts with ETSI to create oneM2M, we saw the potential for a much more complete standard with the added benefit of global scale and credibility.

The length of time required to create a global harmonised standard does create frustration for many with the standards process. At the same time, we do appreciate that the result from the oneM2M working groups is a very detailed and well-documented specification. I’d say that the progress of oneM2M compares well with the 3GPP standard which was initiated in 1998, and saw a first set of products around 2001/2 and mass market traction about five years after its first release. oneM2M, which started in 2013, seems to be progressing along a similar timeline.

Q. Why is the oneM2M standard so important?

JN: We see a lot of standards-related activities in the market from different industry alliances and consortia. oneM2M stands out because it takes a truly horizontal approach. It’s also applicable across different industry verticals. There is no reason why oneM2M can’t be a transparent underlay to many of the other application-specific standards initiatives that have launched in recent years.

You can look at oneM2M as a ‘standard of standards’. It re-uses all of the established industry protocols, such as CoAP, MQTT etc. In fact, oneM2M can support IoT applications for multiple access technologies such as Wi-Fi, ZigBee and Bluetooth to create a common IoT platform in smart homes, to illustrate just one example.

Q. How is InterDigital approaching the IoT market and what can we expect to see in the coming year?

JN: We are looking in several different areas as part of our IoT commercialisation strategy. We have invested in oneMPOWER, our oneM2M-based platform to help businesses to launch and support their IoT applications.

In fact, we will be using this platform to support oneTRANSPORT, which is an intelligent transport trial in the UK. Over the next two years, we will be working with several local-government authorities, the “Highways England” and several transport-sector specialists to lay the foundation for smarter transport networks in the UK. This is quite a large scale undertaking, covering many different types of connected devices and a population base of about 4 million people.

InterDigital also has initiated efforts in the healthcare sector, where we are working as part of the Continua Health Alliance. We are also exploring opportunities in the industrial and enterprise sectors, especially where customers are looking for supplier diversity and therefore need inter-operability capabilities for their IoT applications.

Over the next 1-2 years, we expect to support our existing technology licensing customers who are looking for IoT expertise. We will also be offering oneMPOWER as a licensed software solution and possibly as a service through a PaaS model. Over the near term, oneMPOWER is also available as one of several Application Enablement Platforms offered by our channel partner, wot.io, as part of their data exchange service which allows companies to take a modular approach for their IoT architecture, so that they can plug in their preferred device management, visualisation tool or database, for example, into an overall IoT application.

Q. What advice would you give to companies that are deploying IoT services and solutions?

JN: The IoT is still a nascent market. The ability to spin up a new solution can be quite daunting; there is a lot of effort involved in integrating a complete solution especially if you have to deal with legacy systems. My advice to companies is to look at standards-based solutions where you have an eco-system of multiple solution providers. This gives you multi-vendor interoperability and supplier choice over the long haul.