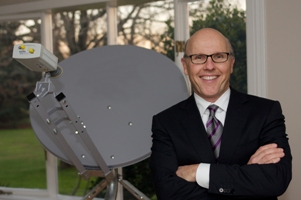 David McCourt, an international entrepreneur with 30 years of telecoms experience, has outlined how future growth of the industry will depend on innovative companies such as newly-purchased Skyware Technologies (SWT).

As the latest acquisition in a portfolio specialising in technology, media and telecoms, Skyware Technologies is now expected by its new owners to grow by more than 50% over each of the next three years.

The company specialises in advanced integrated terminal solutions and satellite RF electronics, with operations on three continents. Its clients include leaders in broadcast, oil and gas, along with government and military clients. These customers include major companies such as Inmarsat, Boeing and Airbus. SWT’s winning combination of high technology, low-cost manufacturing and ground-breaking technology makes it unique in the market.

McCourt said: “We have bought Skyware Technologies because it fits in perfectly with Granahan McCourt’s vision of how the needs of under-served parts of the world will be met through boldness and innovation in design, manufacture and on-the-ground implementation of satellite technology.

“Demand for bandwidth is growing hugely, but many regions of the world lack the means to access it. Equally in the broadcast sector and for NGOs and governments, the need for lightweight, low-cost, high-performance terminals has never been stronger.

“As the global leader in Ka-band, SWT has great potential to provide solutions to the many areas that have poor phone, telephone or broadband infrastructure on the ground, as well as enterprises that have problems with connectivity in remote or harsh environments.

“Through our lightweight terminals and incredibly versatile transceivers, we can see how SWT will transform communications everywhere, including extreme environments and remote regions. Where appropriate SWT will work in tandem with the other businesses in the Granahan McCourt family, providing great synergy.”

SWT was spun out of Skyware Global in 2013, where David McCourt was already a major shareholder.

Oliver Kroner, CEO of Skyware Technologies said: “We are already seeing a dramatic increase of interest in our products and as a Granahan McCourt company expect to realise our full growth potential as the market-leading innovator in Ka-band technology.”