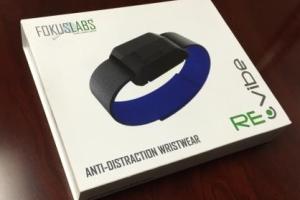 The launch has been announced by Device Solutions Inc’s client and partner FokusLabs, Inc. of the RE-vibe. This is described as the world’s first Anti-Distraction Wristwear™.

RE-vibe anti-distraction wearables are designed for kids and adults, including those with autism and ADHD. Using a proprietary algorithm developed by Rich Brancaccio, founder and CEO of FokusLabs, the RE-vibe is said to “optimally remind” users to stay on task (or to get back on task) using different levels of vibrations on the wrist.

Additionally, LEDs hidden behind the semi-transparent plastic enclosure can alert the wearer to take a break from a task and also remind the wearer when the battery level is low. The algorithm is designed to make sure that the wearer doesn’t get accustomed to the reminders and begin to ignore them.

RE-vibe weighs less than a 1/2 oz. (14 gm) and provides a seven+ day battery life on a single charge. It comes installed with three different anti-distraction levels plus a homework mode. One-touch programming is designed to make RE-vibe quick and easy to use. RE-vibe’s design has no buttons to push and automatically detects when it is being worn to save power.

FokusLabs of Wake Forest, North Carolina, USA, is building and assembling RE-vibe units in the USA. The design is said to be health-conscious, the wristband lining is made from OEKO-TEX certified organic cotton and the enclosure is made of rugged, food-grade plastic free of BPA/BPS, lead and phthalates. In 2012, Device Solutions partnered with FokusLabs to bring an anti-distraction technology to the market to help kids (and adults) in need where no solution previously existed. RE-vibe was designed by Brancaccio, a school psychologist with more than 10 years’ experience of working with children whose inability to stay on-task prevented them from excelling in the classroom. Compatible with classroom settings, the RE-vibe was created with these children and the needs of teachers in mind. Even though the device was originally created for children, due to demand from off-task grown-ups, an adult-sized wristband has also been made available.

In 2015, with prototypes developed by the Device Solutions design team, Rich and FokusLabs launched a fund raising effort on Kickstarter. The funding campaign was officially launched on March 3, 2015 and successfully funded above and beyond the goal of $25,000 on March 27, 2015. More than 180 backers from around the US supported the funding and all of the backers have now received their shipments from FokusLabs. Initial research results show that RE-vibe is making a positive impact in the lives of the wearers.

One customer, Sharon B said: “We have RE-Vibes for both of our children (upper elementary and middle school). Both children report that they enjoy wearing their RE-Vibes and feel it helps them stay on task during school. One of my children’s teachers even went out of her way to let me know she was having to re-direct my child less since they started wearing the RE-Vibe.”

Rich has seen the making of the RE-vibe wearables as part of his life’s mission, “At FokusLabs, we believe that help should never be priced out of reach. We also put people before profit. This is why we are dedicated to sourcing items that are safe for kids and adults to wear everyday and creating them right here in the US.”

Fortunately for Rich, a colleague introduced him to Device Solutions. “I went over and met with their management team to see how much this was going to cost, but instead of talking about money they asked about my vision,” Rich said. In the end, Bob Witter (CEO) and Chris Lamb (CTO) proposed a partnership. “We all agreed we wanted a functional device that families could afford,” Rich explains. “What I didn’t realise was just how good these guys are. They took my dream, including my wish list of improvements like LED lights, on-and-off modes and smart components, and made it a reality.”

According to Bob, there were a number of reasons they decided to take a chance on RE-vibe. “First, we are suckers for any project that helps kids,” said Bob. “Secondly, although we are still a small company, we are significantly larger than the three-person shop we were in 2003-2004. Back then, when we were largely unknown, some folks took a chance on Device Solutions, enabling us to launch and bootstrap our new company. We haven’t forgotten that, and when the timing and project are right we enjoy paying that forward.”

Bob’s final reason for working on RE-vibe was Rich himself. “Rich was focused on getting RE-vibe in the hands of every child who could benefit from it, regardless of their economic status,” says Bob. “There was no question that he was going to succeed. That kind of passion serves to energise us – we had to be a part of it!”