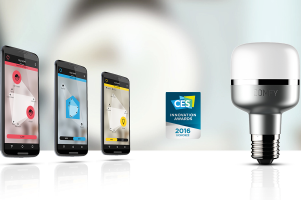 ComfyLight – the smart security light and CES 2016 Innovation Awards Honouree – announced that it will launch its Kickstarter campaign with the aim of raising 50,000 Euros. The new and unique home security solution comes in the form of an LED lamp with the goal to actively protect homes from burglars.

Launching its Kickstarter campaign, the start-up was founded in Zurich, Switzerland in July 2015 by Stefanie Turber and Marcus Köhler. With a second office in Munich, ComfyLight will be recruiting its backers via the Kickstarter crowdfunding platform in order to fund production of the LED lamps with plans to expand its offering.

Previously students at Switzerland’s University of St. Gallen, the two co-founders put three years of research and development into the smart homes space ahead of today’s launch. Their research found privacy was of significant concern when it came to home owner decisions around their security measures. Featuring as a top worry was video surveillance and the possibility of being watched, highlighting a gap in the market for a non-intrusive, private security product that is designed to prevent a burglary.

With that, ComfyLight smart light bulb has been designed with the following key features in mind:

Stefanie Tuber, CEO and co-founder of ComfyLight said: “Our research into the Internet of Things at the University of St. Gallen gave us some valuable insights into the smart home market and what consumers are really looking for when it comes to securing their homes. Before ComfyLight, we were unable to find a security solution that provided home owners and tenants true peace of mind. Conventional systems focus on ‘surveillance’ measures and don’t trigger an alarm until the burglary has already happened – they don’t proactively protect the home, something we look to tackle with our new offering. We’re excited to show it to the world through our Kickstarter crowdfunding campaign and look forward to bringing the product into homes across Europe.”