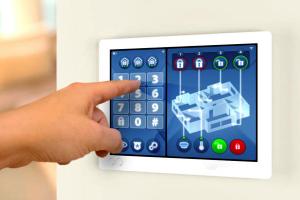 Connected safety and security systems and devices with remote monitoring capabilities are expanding their share of the global smart home market. A survey in the UK in July 2015 identified security as the second most important of five key drivers for the connected home, after smart energy. The BI Intelligence research company estimates that by 2019 home security systems will account for 38% of the connected home market.

Products ranging from smoke alarms and carbon monoxide detectors to electronic locks and motion sensors are becoming more affordable as competition increases between established electronics manufacturers and innovative new start-ups. Nearly all of these products and systems can be controlled via mobile apps on consumers’ smartphones and other iOS or Android devices, says Peter Feuilherade, a former BBC World Service journalist, and a UK-based writer and a regular contributor to the International Electrotechnical Commission publication e-tech.

Apps enable a smartphone to be used remotely as a security camera or a device to open locks or turn lights, heating and alarms on and off. Smartphone connectivity allows users not only to control and customise the operation of individual or connected devices but also to receive real‑time alerts and information from sensors in the home, like sudden temperature changes that can indicate a fire or sound and movement that could mean an intrusion, and to stream the data, for example, to provide insights into longer-term energy use.

The market for smart home safety and security systems is forecast to experience substantial growth worldwide. US-based business intelligence company ON World forecasts that by 2020, there will be 200 million internet‑connected wireless smart home security and safety products installed worldwide. An expected Compound Annual Growth Rate (CAGR) of 34.6% will boost revenues in the sector over the next five years to $ 6.132 billion, according to the Allied Market Research company. The main drivers of growth include price reductions for home security hardware, increased bandwidth availability, advances in wireless communication standards to support systems integration, evolution of mobile devices and smartphones and rising awareness levels among consumers. In Europe, the total home security market will achieve a CAGR of more than 25% between 2015 and 2020, with sophisticated integrated cameras contributing the largest share of overall growth, the research firm Markets and Markets predicts. Environmental sensors that can detect dangers such as smoke, flooding or extreme temperatures all help to keep homes safe.

Basic connected wireless smoke alarms can set off all alarms in the home using domestic Wi-Fi when a single alarm senses danger in the form of smoke, simultaneously alerting homeowners via their smartphones. The latest fire alarms include gas sensors that detect carbon monoxide and nitrogen oxide to identify fires at the earlier stage before smoke appears and give residents more time to escape.

Environmental sensors include the ability to measure moisture levels, temperature, air pressure and air quality and calculate levels of air pollution and dust. Advanced sensors can send instructions to smart thermostats or connected lights, while apps allow users to see their data history and track energy use.

Heat sensors in electronic showers let users control water temperature and flow, saving energy while reducing the danger of burns for children and people who cannot feel water temperature because of paralysis or a lack of sensation.

Water sensors installed near water heaters, sump pumps and washing machines will detect leaks and changes in humidity and temperature. A water sensor connected to an automatic water shut‑off valve can alert homeowners via Wi-Fi, helping to prevent damage caused by burst pipes or overflowing dishwashers.

Sensors are at the heart of a smart home and are built into most connected devices. IEC TC 47: Semiconductor devices, includes sensors in a number of its publications. IEC SC 47E: Discrete semiconductor devices, prepares International Standards for components used in a variety of sensors.

Security products for smart homes include cameras, motion sensors, door and window sensors and alarms, electronic locks and panic buttons. Internet-connected security cameras enable homeowners to view a live feed of the inside or outside of a house from any location on mobile devices through companion apps. Motion sensors and detectors, sound detectors and night‑vision functionality enable advanced smart cameras to recognise faces or detect suspicious movement in pre‑defined “activity zones” and send alerts when appropriate. Some services store recorded footage for a monthly fee, usually less than the charges of traditional home surveillance companies.

Locks are a growing product category in smart home security. A smart lock connects to smartphones via Bluetooth to sense when a recognised user is approaching and unlock itself through an associated app. Users can lock and unlock doors remotely and issue digital keys to people requiring temporary access, while some smart locks include a built-in camera which can send pictures of visitors to smartphones.

Increasingly, smart security systems are integrated with a home automation system so they can be controlled from the same device used to operate other electronic subsystems in a smart home.

The author of this blog is Peter Feuilherade, a former BBC World Service journalist, and a UK-based writer and a regular contributor to the International Electrotechnical Commission publication e-tech.