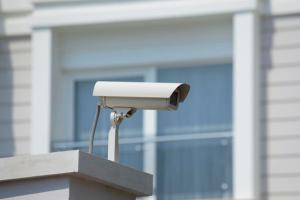 Sensors can be linked to an alarm system

Elderly people represent an ever-growing proportion of the population. By 2025, there will be 820 million people aged 65 and older globally. The shift in demographics towards an ageing population will make it impossible to keep everyone who needs care in hospital. Fortunately, advanced bio‑monitoring systems and remote monitoring technologies make it easier for elderly people to retain their independence and live at home for longer.

They include fall detectors and wireless sensors to track activity levels, sleeping patterns and medication schedules. People with dementia can have their homes fitted with automated sensors that check whether cookers have been left on or taps have been left to overflow, and if necessary alert caregivers via smartphones or tablets, says Peter Feuilherade, a former BBC World Service journalist, and a UK-based writer and a regular contributor to the International Electrotechnical Commission publication e-tech.

All the sensors located around the home are connected via an internet gateway to a cloud‑based self‑learning algorithm with advanced behaviour pattern recognition capabilities that analyses activity signals from the sensors to learn a homeowner’s daily routines and behaviour.

Linking these sensors to an alarm system enables families and carers to check on the well being of relatives at any time via a smartphone app, and sends alerts automatically to healthcare services, family members or friends when irregular patterns or variations from routine are detected.

Modern medical alert systems include wristbands, watches and mobile phones equipped with emergency buttons or apps. Their capabilities have expanded to include GPS tracking and detection of falls, one of the major causes of injuries and hospitalisation among older people. Although an accidental fall cannot be prevented, fall detectors reduce the impact of a fall or injury by ensuring timely medical assistance. Fall prevention systems use mattress pressure sensors to detect when someone gets out of bed at night and alert a smart house lighting system to automatically turn on a series of lights that can lead him or her to a destination, and turn them off when the person returns to bed.

A range of diagnostic tools and devices, including Bluetooth-connected electronic thermometers and stethoscopes, enables users to check their temperature, heart rate or blood pressure at home, collect information that they can send to their doctor via the cloud and even perform a home “check-up” using a smartphone app. In the future, a growing number of older people will be connected remotely with service providers who will be able to detect changes in physical and mental health as well as mobility.

The IEC Systems Committee on Active Assisted Living (SyC AAL) has the role of promoting safety, security, privacy and cross-vendor interoperability in the use of AAL systems and services, and of fostering standardisation which enables their usability and accessibility. IEC TC 100: Audio, video and multimedia systems and equipment, has created a Technical Area, TA 16, dedicated to the preparation of International Standards for AAL, accessibility and user interface.

The smart home market involves several wireless communication technologies including Wi‑Fi, ZigBee, Z-Wave, Thread and Bluetooth Low Energy (LE). Some devices will work together, but others operate only with devices from the same company or brand.

The IEC White Paper Internet of Things: Wireless Sensor Networks (2015) assesses the need for standards to achieve interoperability among wireless sensor networks from different vendors and across varied applications. Greater standardisation is vital in order to increase interoperability between devices and platforms so that smart home applications can realise their full potential.

Keeping data secure is another major priority. Tests conducted by Hewlett‑Packard in 2015 found that the network connectivity and access necessary for remote monitoring make smart devices used in home security systems like video cameras and motion detectors potentially vulnerable to tampering by hackers. Password security, encryption and authentication issues were the main concerns that emerged.

The IEC, through its work in ISO/IEC JTC 1/SC 27: IT Security techniques, a Subcommittee from the Joint Technical Committee it set up together with the International Standardisation Organisation (ISO), is directly involved in reinforcing data and network security in a wide range of applications. This activity represents another essential addition to the wider adoption of connected safety and security systems in smart homes.

The author of this blog is Peter Feuilherade, a former BBC World Service journalist, and a UK-based writer and a regular contributor to the International Electrotechnical Commission publication e-tech.