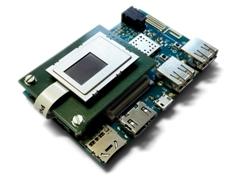 NEXT Biometrics Group ASA, a provider in high-quality low-cost fingerprint sensors, and Arrow Electronics, a global electronics distributor, are targeting the fast growing Internet of Things (IoT) market with a new turnkey biometric solution for Windows 10, NEXT announced at the annual Mobile World Congress held in Barcelona, Spain, this week.

The solution consists of Arrow Electronics’ community board, DragonBoard 410c, based on the Qualcomm SnapDragon 410 processor, and NEXT Biometrics’ turnkey biometrics security module, NB-1411-S, NEXT said.

Arrow Electronics is a U.S.-based company that serves as a supply chain partner for more than 100,000 original equipment manufacturers. The company had 2015 sales of $23.28 billion USD and has 17,000 employees worldwide.

“With the rapid expansion of new generation of Internet of Things devices, we are excited to be working with Arrow to bring the biometric authentication feature to their quickly growing DragonBoard community,” said Radek Matyasek, VP sales EMEA at NEXT Biometrics.

Arrow Electronics is presenting the joint solution at Booth 5 in Hall 258 at Embedded World in Nurnberg, Germany, February 23rd-25th 2016 and NEXT Biometrics, headquartered in Oslo, Norway, is presenting at its Booth 6H20 in Hall 6 at Mobile World Congress in Barcelona, February 22nd-25th 2016.