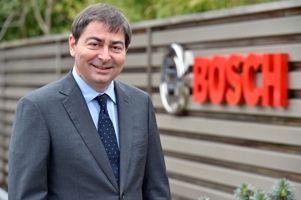 Bosch is fuelling the imagination of young, women engineers with the launch of a campaign aimed at bringing the Internet of Things (IoT) to life.

The #BetweenUsWeCan campaign, which supports efforts to improve gender diversity within engineering, will include an online competition that seeks out the best new applications of the IoT.

Three winners will get the chance to pay a two-day visit to Bosch’s state-of-the-art Renningen and Reutlingen research and development facilities near Stuttgart, in Germany. This is where IoT technologies are being developed and brought to life for Bosch. The winners will also receive a year’s mentoring from Bosch engineers. Dr Steffen Hoffmann, president of Bosch in the UK, said: “The UK is facing a critical shortage of new engineers entering the workforce and the problem is made worse by the lack of women entering the profession. Women have the ambition to solve problems and change the world, and the talent to deliver it. Our competition aims to shine a light on their imagination and their skills.

“Bosch wants to fuel the imaginations of the brightest young women engineers by asking them to think how the IoT might transform our lives.”

Entries for the competition will be shortlisted and assessed by an expert judging panel including professor Danielle George, Associate Dean for Teaching and Learning at the University of Manchester and Presenter of the Royal Institution’s 2014 Christmas Lectures; Dr Steffen Hoffmann, president of Bosch UK; Jon Excell, editor of The Engineer magazine and website; Cat Dow, Connected Vehicle Technologies Editor, Just Auto magazine and website; Sarah Claridge, qualified engineer and account director at Technical Associates Group; and Lauren Childs, Digital and Marcomms specialist at Bosch UK.

The IoT is pulling together the many strands of digitisation, ushering in a world of intelligent devices that can collect and exchange data, leading to more connected products and factories. Bosch, for instance, has developed a smart parking assist system that uses occupancy sensors in towns and cities to inform drivers of available parking spaces. Elsewhere, the IoT is already being applied across multiple sectors, from Bosch’s Smart Home that integrates heating, light, doors and windows, to the provision of multi-functional smart tools in factories.

To enter the competition, entrants aged between 18 and 25 will need to describe an innovation that, by harnessing the universal connectivity of the IoT, would make the world a better place.

The competition will run from March to May 2016, with the winners being announced in the lead up to National Women in Engineering Day (23rd June 2016). Entries can be emailed to engineeringideas@uk.bosch.com.