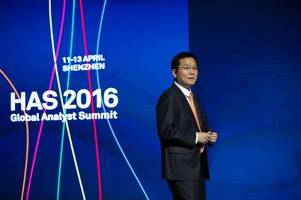 Patrick Zhang at HAS 2016, President of the Marketing andSolutions Department of Products & Solutions, Huawei

Shenzhen, China — Huawei reports that it has seen breakthroughs with its five IoT solutions, as it tries to build a robust IoT ecosystem and innovate with its partners.

This emerged from this week’s Huawei Global Analyst Summit (HAS) 2016, where the company described the Internet of Things (IoT) as one of its strategic priorities. Jeremy Cowan reports from Shenzhen.

The IoT era is here, changing lives for the better and powering innovation and transformation in all industries, says Huawei, which forecasts that there will be 100 billion physical connections in 2025, representing a ten-fold increase compared to today. The number of virtual connections will exceed 1 trillion, a 100-fold increase over the current number.

At HAS 2016, Patrick Zhang, president of the Marketing and Solutions Department under Huawei’s Products & Solutions, explained that Huawei launched its “1+2+1” IoT strategy in 2015 to seize IoT opportunities. With its ICT technologies and heavy investment in R&D, Huawei has provided solutions for the IoT operating system (OS), device chips, network access solutions, and platforms. Alongside its partners, Huawei has innovated and adapted solutions for various sectors, including the Internet of Vehicles (IoV), energy, manufacturing, and smart homes.

Based on its “1+2+1” IoT strategy, Huawei has unveiled five IoT solutions:

The IoT holds great potential, yet its development has been held back by a fragmented market where industry needs and standards vary. To address this issue, Huawei has played an active role in standards organisations and alliances, and has made significant contributions. For example, the company currently serves as the vice chairman of the Alliance of Industrial Internet (AII), an initiative launched by China’s Ministry of Industry and Information Technology. In the alliance, Huawei heads up the experiment platform team, has set up showcases for vertical industries, replicated experience on a large scale, and established a testbed used for addressing inter connectivity and interoperability problems.

In March 2016, Huawei led efforts to enhance interoperation between oneM2M and the OSGi Alliance, in order to ensure IoT interoperability based on bottom-level frameworks. As a result, Huawei claims to have helped break down barriers across products, protocols, and industries, thus opening up a new phase of development for the entire IoT industry.

At the end of his presentation, Patrick Zhang reaffirmed Huawei’s commitment to investing heavily in the IoT and building a strong IoT ecosystem with its industry partners.