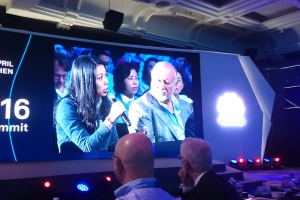 One analyst asked what was Huawei’s strategy for dealingwith small, agile competitors

Shenzhen, China — Eric Xu, the rotating CEO of Huawei, China’s largest telecom equipment and services provider, isn’t like most chief execs. Not only was he happy to take questions from an international posse of 500 communications analysts and media, he did it unscripted and with a strong sense of humour.

And on the rare occasion that his interpreter had a word out of place Mr Xu’s Mandarin was put on hold while he corrected the English translation. I never saw Balmer do that, writes Jeremy Cowan.

KPMG Strategy of London kicked off the Question and Answer session at yesterday’s Huawei Analyst Summit 2016 (HAS2016) in Shenzhen, China with two questions. First, how does Huawei help mobile network operators (MNOs) cope with rising data traffic volumes? And second, in the light of recent mergers and acquisitions, such as Cisco’s agreed purchase of Jasper for US$1.4 billion and the Nokia / Alcatel-Lucent merger, what is Huawei’s policy on M&As?

“Everything we do now is designed to help operators cope with the explosion of traffic growth. Our basic strategy is that traffic is as wide as the Pacific Ocean – our 5G, 4G, 1 Terabyte routers and cloud initiatives are all designed to cope with this data traffic. As to M&As,” said Xu, “consolidation in our industry contributes to the health of the sector.”

‘That was my question, too’

Business Weekly Taiwan asked, “What is the future of your smartphone business? Huawei shipped 50% of Samsung’s global output last year and 60% of Apple’s. Yet Richard Yu (Consumer Business Group CEO) was quoted in the press as saying that Huawei will overtake them both next year. How will you achieve this?”

Amid loud laughter Eric Xu replied, “That is exactly the question I asked Richard. He said he was talking about the Chinese market, but when the journalist reported it he left out ‘in China’.” Cue more laughter. “How to do that is still a question for Richard. China has not yet produced a high end consumer brand. We hope to do that in five to ten years.So, in five to ten years we can meet again and you can ask me how we’ve done that.” (Laughter).

An analyst from Analysys Mason said that some of the greatest challenges for operators, and vendors, were coming from smaller companies in new markets with new end users. What was Huawei’s strategy for dealing with this, she wondered?

Consumers and enterprises are not satisfied

Mr Xu replied: “It’s a common challenge for telcos and vendors. And ‘challenge’ is a neutral word for what the industry faces. Consumers aren’t fully satisfied by the price or quality of service they receive from operators. Similarly, enterprises are dissatisfied with the time-to-market for their new services, and the agility of their service providers.

“OTT (over-the-top) players might see telcos as a road block in delivering new services quickly. Maybe there are new business models and technologies that will overthrow the telecom industry. Governments, too, would love to have cheaper communications services.”

“Even telecom equipment providers’ prices may, in some cases, be too high.” (Laughter.) “Huawei has a focus on lower costs. Disruption comes from non-traditional telco players,” he mused. “That’s why we see satellite, balloon and drone communications being tested, to come up with lower cost and wide-reaching telecom services. Most have found that doing it from the ground is too expensive and look to do it from above.

Industry has to come up with faster cheaper alternatives. That’s why we’ve come up with the ROADS programme to inject new momentum into that journey. (Also see: Huawei pursues open cooperation to build a robust ecosystem for a Better Connected World.)

Another analyst said Huawei has been successfully growing in other parts of the world (outside China), adding that recently Cisco has announced a plan to invest US$10 billion in China and Dell is reported to be investing $100 billion here over a number of years. “What is your view of these investments?”

“Their investment in China is right,” said Eric Xu. “In the global landscape of ICT (information and communications technology) the USA, Europe and China will be the three largest and most critical markets. The fastest growing will be China. The US accounts for almost 40% of global ICT spending, and China is very small right now but if China can grow to the same spending per head as the US we can see what the potential will be.”

Will IoT customers wait for standards?

For IoT Now, your correspondent put it to Eric Xu that the IoT sector as a whole had been waiting years for the development of industry-wide standards. “Does Huawei believe that IoT must continue to wait for standards or will the growth of partnerships and open ecosystems be enough to meet the growth needs of the Internet of Things?”

“The IoT landscape is now quite fragmented,” Xu replied. “So it’s difficult to envisage one standard. Our objective is to work with telcos on developing standards and I believe a standard will come out this year (He was not specific about which one. Ed.). I believe that next year telecom operators can base their plans on this standard, to develop services with partners and to deliver the necessary services to their networks.”

Godfrey Chua of Machina Research asked about Huawei’s plans for IoT and R&D (research & development) investment in the next two years. Xu replied, “Our IoT strategy is focused on connectivity and that will be an intrinsic part of our commitment to a ‘Better Connected World’.

“We hope telco networks will carry more IoT connections. In order to promote IoT development we’ve worked on chipsets, modules and software operating systems working on top to enable partners to work across these. We are also working on a connectivity management platform.”

From Forrester Research, Randy Heffner asked how the company will encourage open ecosystems and developers?

Xu pointed out that last year Huawei had its first open developer congress. Ryan Ding, president of products and solutions, then announced $1 billion investment to build an open ecosystem. “We’ve set up a network portal to engage with the developer community, and an open SDK (software development kit).

“In the telco space, Huawei’s position will be to create a larger developer community, and as its enterprise business grows the partners and developers will become a critical building block of our strategy. All our products should be able to open up with an SDK. Having said that about how to attract developers, Huawei is still an early learner.”

“In 2020 how will we gauge Huawei’s success?” asked Jerry Cann of Current Analysis. He wanted to know what their KPIs (key performance indicators) were.

“It’s possible for Huawei to be a US$100 billion company (Also see: Huawei reports 2015 revenues of US$60.8bn as strategic focus and investment lead to new tech and sustainable growth.) and we must maintain a reasonable margin. We can achieve $80 billion revenues for B2B (business-to-business – enterprise and carrier sales) by 2020. And for the consumer business we have the target already publicised of $20 billion by 2020.”

William Fellows of 451 Research wanted to know when the company could become a $10 billion enterprise ICT vendor.

“We can do this by 2019,” said Xu. “As companies move to the cloud and SDN (software-defined networks) that presents a big opportunity for digitalisation.

“Will you have a smaller set of telcos to work with in future?” asked Chris Lewis from Lewis Insights.

“I remember in 2005, the topic was All-IP. We thought all telcos would move to All-IP.” At this there was wry laughter in the hall, but Eric Xu kept a straight face. “However, not all telcos have moved to all-IP. In particular, we’ve raised the concept of IP for services but there’s no global interoperability for this.

“Today we’ve proposed All-Cloud, and I foresee it will be a long process. Huawei also has to move faster to fully ‘cloudify’, to future-proof all our services for all our customers. It’s true to say that whoever has been moving faster to all-IP has been doing well.”

“In the last 10 years we’ve seen the impact of IP on changes in the networks, however sometimes we’re seeing the same base stations and access equipment as 10 years ago. NFV only addresses the issue of sharing hardware resources. It doesn’t bring too much benefit to the transformation of the network. And NFV should be NFC (network functions cloudification) and it’s only with NFC/cloudification that the full potential will be realised,” Xu added.

Will there be true cloud service providers?

He concluded, “We need to combine the strengths of telcos and Huawei, using the telcos’ networks, branding, and local customer base, with Huwaei’s strong R&D and broad product range.”