Home › IoT News › Automotive › Do you need a crazy, IT-addicted mayor to develop a smart city? 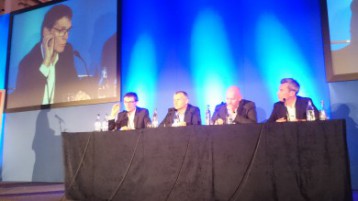 A high-level network operator panel was assembled on Day One of M2M World Congress 2016 in London last week. Moderated by Tom Rebbeck, research director at Analysys Mason, it covered operators’ future roles and the proposed need for a “crazy, IT-addicted mayor” when creating smart cities.

Given the operator bias of the panel it was interesting that one of Rebbeck’s first questions to them was, “What are your non-connectivity opportunities?” (Also see: At MWC 2016 we observed maturation of IoT partnerships in various sectors.)

Those only attending on the first day of the event were given a bit more information by Hans Dahlberg, head of M2M Services for Sweden-based TeliaSonera AB. He said the horizontal product portfolio is a big challenge for TeliaSonera customers; apparently, it’s difficult for them to do the first pilot. “So we must reduce the barriers to entry, and for those higher in the value chain we’re talking a lot about platforms at events like this.”

With so many partners involved in Internet of Things (IoT) ecosystems, Rebbeck wanted to know how these network operators manage to change their partners every 12 to 18 months. “Is it all about having clear SLAs (service level agreements)?” he asked.

Gerhard Schedler, head of M2M / IoT Centre of Competence at Swisscom, singled out his company’s Connectivity Management Platform. “You need to bring data to the cloud,” he said, like DT’s Cloud of Things.

Nicholls replied, “We’re not even 300 people yet, and if we tried to do more we’d fail. This is an ecosystem play, however you look at it. Don’t try to fool anyone you do everything.”

“Could that change?” asked Rebbeck.

“This is a high volume game,” Nicholls answered. “If we started to do devices no device maker would work with us.”

Turning to the panel as a whole, Rebbeck asked, “How did you all select your vertical markets?”

TeliaSonera’s Dahlberg said, “It was the connected car market for us (In December 2015 TeliaSonera launched a connected car device designed to bring the benefits of telematics and travel information to owners of cars made as long ago as 2000. See: TeliaSonera unwraps smart solution for connecting your car). You leverage where you stand, and we’re good at handling data. Smart homes will be a focus for us next, and all smart buildings. Like with the connected car, we want to be the owner of an ecosystem. We want to be open, to talk a lot to our partners, to collect data, aggregate it, and act on it.”

How do telcos avoid stepping on their partners’ toes, Rebbeck asked?

Dahlberg replied that their partners benefit from low barriers to entry. “The price for that,” he said, “is an open, competitive ecosystem. So they have to offer something special.”

“We still make 90% of our (IoT) revenue on connectivity,” said Swisscom’s Schedler, “and I see it’s the same for Vodafone,” (in Switzerland).

“IoT is such a buzzword,” DT’s Lautz added. “Deutsche Telekom also has T-Systems, its global IT services and consulting company, with £6 billion (€8 billion) turnover.” He predicted that soon the IoT world will be separated into consumer and business groups, the former dealing with sectors like smart homes and the latter with industrial IoT. “Another new area for us,” he said, “is fashion. It’s related closely to fitness so it makes sense to have wearables integrated into clothes. He hinted that the industry can expect an announcement from DT in this sector soon.

For IoT Now, Jeremy Cowan pointed out that so far the panel had made no mention of one sector often treated as a single industry vertical, Smart Cities, even when these are made up of many industry applications such as utilities, traffic control, waste management. Given the need to integrate the many different applications, he wondered if the panel felt that telcos would have an advantage — given their integration expertise gained in managing siloed voice and data services over the last decade?

The panel were quick to ascribe the greatest expertise in this area to system integrators, even though the integration has happened on telco legacy infrastructure for telco services. This came as a surprise to you correspondent — perhaps the telcos  already feel under enough pressure to deliver IoT without claiming primacy.

So, if smart city projects are still comprised of service siloes, just how smart are they?

Dahlberg acknowledged the challenge, and was ready to accept the major role that communication network operators will have to play in deploying smart cities. “How smart is a smart city?” he asked rhetorically. “Yes, telcos have a good position, being connected to people and vehicles. We are there. Maybe it (the smart city) will start with smart transportation. There are roughly 250 smart cities worldwide, but often they are small areas, and small applications. That’s why we have ecosystems, and SIs (system integrators) are in that.”

Schedler commented, “Smart city means different things for everybody, from Budapest to Africa and Asia. We have local knowledge and data centres. We have to bring siloes together, who else but Swisscom and trusted partners can manage the data? It should not be (data) owned by us, but available to partners.”

Lautz added: “Smart cities without telcos won’t work, but they won’t necessarily be leading it. We have a strong public IT part, so it’s natural for us to be an integrator of different applications. The telco is not the natural provider, an SI is.”

You need a crazy mayor

“The most interesting part is the business model. In Europe no city has money and no government has money. So who’s funding it?” he asked. Lautz recounted a recent visit to Nanjing in China. “The engineer/architect there told me it took him two years to get all the department heads together, but when they made a decision it only took them one year to implement it. “This is not always what the West does best,” he added wrily. “You need to have a crazy, IT-addicted mayor to get things done.

“We know street lights can host sensors and you can add video cameras, and earthquake sensors, but the question is who is rolling it out? Who’s integrating it? Who is going to invest that money? There’s no business case in doing just one street. So you need a crazy mayor.”

Rebbeck wanted to know how it’s being done in China.

“It’s a joint venture of three carriers,” said Lautz. “It includes video surveillance and waste management. The companies involved are all obliged to open up their platforms.” Maybe the carriers should be obliged to build one company, and one platform, he said.

“And is Deutsche Telekom going to lead such investment?” Rebbeck asked.

“We don’t do it now,” said Lautz. “We have the NB-IoT infrastructure, and data handling infrastructure. That’s asset-heavy and I don’t think telcos have the ability to invest in (smart city infrastructures) too.”

Gerhard Schedler added: “Swiss Post and SBB (Swiss Federal Railways) are rolling out their own communications infrastructure. We try to prevent it because then you have so many networks.