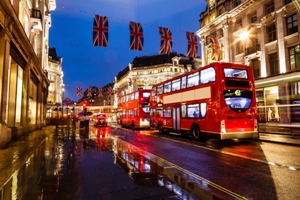 London and Bristol are Britain’s leading “smart cities”, according to new research commissioned by Huawei UK and conducted by Navigant Consulting.

The first-ever Huawei UK Smart Cities Index measured how well the nation’s urban centres are doing at using digital technology to improve everything from their transport infrastructure to their refuse collection.

London and Bristol were ranked as “Leaders” at the top of the table; next came the “Contenders”, with Birmingham in third place, followed by Glasgow, Manchester, and Milton Keynes.

The Huawei UK Smart Cities Index rankings were calculated by an in-depth analysis of ten criteria within their strategy and execution, covering areas such as their vision, objectives, implementation record, environmental impact and community reach.

London and Bristol came top as a result of pioneering a range of urban innovations. London’s successes include its congestion charge scheme and other transport innovations and the London Datastore. Bristol’s achievements include the unique “Bristol Is Open” project, which has brought together the University of Bristol, Bristol City Council and industry partners to create a city-scale network for innovation.

Other notable programmes include Birmingham’s plans to make East Birmingham a testbed for smart technology; Manchester’s new Internet of Things City Demonstrator; Glasgow’s range of projects developed as part of Future Cities Demonstrator programme; and Milton Keynes’ MK:Smart collaboration on IoT projects with the Open University and other partners.

The Index highlighted five themes that are common across the most successful smart city programmes which are, the importance of leadership and vision; a need to focus on local priorities and strengths; the importance of engagement with local communities; building local partnerships and understanding the way in which the data revolution can improve services and boost innovation.

The report also highlights the role the UK Government has played in building momentum behind smart cities through the Future Cities and IoT demonstration programmes which has provided important seed funding for winning cities. While the establishment of the Future Cities Catapult has ensured continuity of interest, important questions are raised regarding the need to bridge the gap between funding for demonstration projects and full-scale commercial deployments.

The report cites the need for future demonstration projects to have a strong emphasis on both measurable outcomes and sound business cases, as well as encouraging wider collaboration and knowledge sharing between UK cities.

Ed Vaizey MP, Minister of State for Culture and the Digital Economy, speaking at the launch event said: “The Huawei UK Smart Cities Index highlights cities developing innovative digital projects and measures how well they are performing against each other. I hope it will encourage city leaders to share best practice and promote competition, because smarter use of data and technology drives growth and delivers a better quality of life.

The Government strongly supports the Smart Cities sector, through the Future Cities Catapult and the Internet of Things City Demonstrator programme, and we welcome this report.”

Gordon Luo, Huawei UK CEO, said: “From Bristol’s open data strategy to Milton Keynes’s pilots of autonomous vehicles, there are excellent smart cities projects all over the UK. We wanted to understand how well advanced these schemes were and where lessons could be learnt between them.

The Huawei UK Smart Cities Index shows that, right now, Britain is one of the most advanced countries in Europe in this field. But it’s still early days and there is more work to do to build more effective partnerships between city authorities and technology providers, and in making the benefits of smart city technology apparent to a greater number of citizens.”

Eric Woods, research director at Navigant Consulting, who led the study, said: “London and Bristol stand out from the crowd for combining technical innovation with a broader strategy for city development. But there are a number of cities close behind them with strong smart city programmes. The message from our research is that more city leaders need to embed the idea of smart capabilities into their urban projects. Cities and central government also need to work together to ensure successful pilot projects are turned into scalable projects that benefit all citizens.”