Can connected city products and services help Singapore and Malaysia beat their challenges? - IoT Now - How to run an IoT enabled business 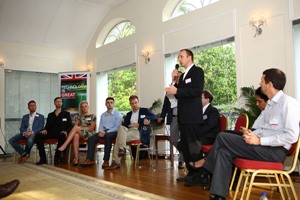 In the third and final part of IoT Now’s report on smart cities in Malaysia and Singapore, we hear from ten UK companies that recently visited the countries as part of the Connected Cities Trade Mission, organised by Innovate UK and UK Trade and Investment (UKTI).

“Our products currently provide the highest levels of physical security available from the security industry,” said Eleanor Wright, Marketing and New Product Design at Aralia. Focusing on the quality and accuracy of information available to secure critical infrastructure, urban areas and transportation systems, she added, “Medium term, our products offer the possibility of automating manual tasks such as those found in hospitals, airports and any other labour-intensive processes.”

Priya Prakash of Design For Social Change (D4SC) said their products allow city authorities to make better informed planning, development and maintenance decisions, by harnessing the insight of a city’s citizens, to inform those decisions. “This results in development that is ultimately fit for purpose – both large and small scale and allows city planners to more accurately prioritise city developments. The end result is greater citizen satisfaction and reduced costs.”

Unlike first generation citizen/complaint reporting services like FixMyStreet that create noisy data, Changify answers the question ‘Which problem needs fixing first?’ And through real-time integration with the maintenance and scheduling systems of some of the UK’s largest maintenance providers to local authorities, it reportedly ensures more accurate targeting of resources and greater citizen satisfaction.

Bronze Labs’ CEO, Richard Howells, commented, “Our technologies ‘Framework42’ acts as the ‘glue’ which interlinks the Internet of Things via services, sensors, data and citizens within a smart city. The technology works through enabling citizens to interact with the city via their personal smart phone device. Citizens can report on classic community issues like potholes graffiti et al, however our technology goes a significant step further enabling citizens to also get involved with resolving these community and social issues themselves. Strained council services mean citizens have to wait for their case to be actioned or worse wait until the situation becomes ‘critical’ before the authority can justify taking action.

“Our application means vulnerable people in society can make requests to not just their local council but also to society at large for support. For example, a wheelchair dependant individual could send a request out to their area for a local volunteer to change a light bulb in their home. Conversely, the power of these community networks can also be tapped into by government to engage useful community action. Sensors monitoring water flow rates in a local river can trigger a community call to action to deploy sandbag along a river bank protecting local businesses. Additionally, the platform records individual community engagements, storing reward and interaction points for use within local government promotion schemes.”

Cities can’t exist without their high density of buildings, so this is the space in which BlockDox operated,” said Nic Shulman, founder & CEO. “BlockDox helps building managers manage buildings better using the Internet of Things saving them money and improving customer service to occupiers. This is particularly relevant to building operators in the region who can use BlockDox to make the buildings operate more efficiently, sustainably and work better for those visitors and occupants.

“By utilising the existing building’s IoT infrastructure our retrofit takes as little as 20 minutes and provides a payback normally within 9 months. This bottom-up approach to connecting previously dumb buildings to a Cloud-based data analytics service makes the buildings much smarter and gives the property management team the ability to achieve an in-year return and improved conditions for the building occupants. When combined with a top-down smart cities strategy the aggregated data and insight can be deployed in new ways to maximise the use of limited human and natural resources,” he added.

Preliminal’s CEO, Dean Gifford, pointed to the company’s 3D environment platform, Mantle, which is said to allow effortless creation of massive urban environments and terrain, enabling rapid prototyping of geo located data visualisations, transport simulations and city planning and modelling. “Mantle eliminates the knowledge required to produce a detailed environments and produces large scale environments in near real time allowing many prototype iterations that previously were out of reach due to time and cost,” he said.

“City climate planning – the urban response to climate change is crucial as cities use 75% of the world’s energy – even more in Singapore and Malaysia, Carbon Trust’s Tim Pryce, head of Public Sector believes. Carbon Trust’s Low Carbon Cities programme aims to help local governments to design and implement emissions reduction strategies that also save the city money – for example identifying savings of over RM1.4 billion and 36Mt CO2e in Petaling Jaya. More broadly, we have the expertise to cost and prioritise adaptation and mitigation measures at scales from individual buildings to national.”

Pryce continued, “We also have huge experience in low carbon buildings, and can help developers in fast growing cities to understand how to construct low carbon buildings from initial planning through to commissioning and handover – this could save a fortune in Malaysia. And finally, we are providing practical support on planning, procuring, designing and modelling low carbon infrastructure projects such as district cooling.”

“Innovative cities have recognised that their streetlights have untapped potential,” said Telensa’s Chris Johnston, business development manager.  “By connecting streetlights as they are converted to LED, a new generation of low-cost ‘light-centric’ sensor networks can emerge in a matter of days.  Telensa claims to be the first company to have developed the system to do this across wide areas and that pays for itself in energy and maintenance savings. Telensa’s worldwide footprint now exceeds one million streetlights.”

Ordnance Survey International offers a resilience solution that allows different emergency response organisations, such as fire, ambulance and police services as well as civil defence to coordinate response efforts. Carsten Roensdorf, head of Advisory Services told IoT Now, “ResilienceDirect™ (RD) can be deployed in command and control centres and also in the field by first responders on mobile devices, giving everyone a common situational awareness and collaboration tool to deal with an incident. The solution allows quick scenario planning and location analysis in the event of an emergency. This is based on authoritative map and sensor data (such as live weather feeds) published by key government agencies that are all securely combined into a tool that aids decision making and information exchange between emergency responders.

“Dealing with natural disasters, acts of terrorism or industrial incidents in a coordinated and efficient way can help to save lives and minimise damage to critical national infrastructure. The web-based mapping tool was developed on behalf of the UK Cabinet Office in order to improve the ability of the emergency response community to deal with national emergencies and increase Great Britain’s resilience. It was very recently used in the response to the winter flood events in the UK,” said Roensdorf.

“Together with our UK Government partners we can provide a set of tools, guidance, training and methodologies to support emergency planners and help responders work together more effectively in incident planning, response and recovery,” he added.

Finally, IoT Now asked, for which other regions the executives would consider joining trade missions in the future?

CEO, Richard Howells said I think it would be helpful to return to SE Asia in order to better apply what we learnt during our first ever visit. Bronze Labs is also keen to follow up in Dubai and India, again applying the skills picked up from the mission.

Demand Logic would return to the USA on a trade mission, particularly to the east and west coasts. “We would also consider returning to Singapore and KL as well as Australia,” Sonny Masero said.

“Apart from our established markets in the UK and US,” said Telensa’s Chris Johnston, “we are entering most regions for the first time. Where there are cities looking to replace inefficient streetlights with connected LED streetlights with smart city capabilities, we are keen to join with future missions.”

China, North-East Asia, Iran, Eastern Europe and India are regions that Ordnance Survey are actively looking for new projects to take part in.

“With a global market we’re looking everywhere,” Preliminal’s CEO, Dean Gifford, confirmed. “However our next step focus is on the EU and the US.”