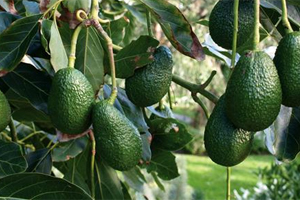 It takes 74 gallons of water to produce one pound of avocados and drought-stricken California produces 95% of avocados grown in the United States. Nearly all are grown in Southern California, in a five-county region that straddles the coast from San Luis Obispo to San Diego.

Like the rest of the state, the southern coastal region is caught in a drought and largely cut off from the flow of surface water from the state’s big irrigation projects. Avocado groves have been hit badly with sky-high water costs and owners have have been forced to rely on water pumped from underground aquifers.

Water consumption is regulated in California with the state entering its fourth year of drought, resulting in water regulators imposing sweeping and draconian restrictions on water use. The State Water Resources Control Board has even urged Californians to let their lawns die.

How to save water usage with new avocado growing method

Some avocado farmers in California have turned to new methods in growing avocados such as higher density planting which enables some to produce twice as much fruit for the same amount of water.

Now, a new initiative from Spirent Communications in connecting avocado farms might be a solution to help lower spiralling water costs.

Kurt Bantle is a senior solution manager at Spirent Communications and has 900 young avocado trees planted in his “back garden” in Southern California. It is part of his remit to develop Spirent’s IoT offering, so he decided to examine how avocados could be grown using less water through soil moisture monitoring and automated irrigation.

Bantle divided his farm into 22 irrigation blocks and inserted two soil moisture measurement units into each block. The units contain a LoRa unit for narrow band data communication to a LoRa gateway which has broadband cellular uplink connectivity functionality. The gateway also contains an Oasis re-programmable SIM which becomes the enabler in remote water provisioning. All soil moisture data is collected from the avocado trees into a cloud and visualised by a presentation layer.

When a tree needs to be watered, the solution turns the sprinklers on automatically to get the correct level of soil moisture for each tree. It then turns them off when the right moisture levels are reached. The connected trees are monitored constantly day and night.

“Avocado trees typically take 4 acre feet (1 acre foot = 326,000 gallons) of water per acre per year. This is not only to supply the needed water, but also to leach the salts which build up in the soil,” said Bantle.

“The soil moisture sensors let me drastically reduce water usage by telling me when to water and how deep to water to push the salts past the bulk of the rooting zone. The majority of the roots are in the top 8 inches of soil so there is a sensor there and one at 24 inches so I can see when I’ve watered deep enough to get the salts out of the rooting zone,” added Bantle.

“The case study showed water usage reduction by 75%, but the usage will climb as the trees get bigger. The goal is to reach a 50% reduction of water usage when fully grown. By keeping the salts in check along with keeping nutrients supplied, stress on the trees is reduced and they are able to have better crop production,” said Bantle.

The downside for Bantle in harnessing the power of IoT to reduce water consumption was that he was placed under state surveillance for meter tampering.

The connectivity solution provided by Spirent together with its IoT ecosystem partners for avocado trees applies to every type of vegetable and fruit farming including almonds, olives, apples, oranges and tomatoes.

Spirent’s Embedded Connectivity solution will be launched during 2016 in a phased manner so that the commercially available solution conforms to the corresponding GSMA specification releases.