Home › Blogs › How the Cloud Makes the IoT Manageable 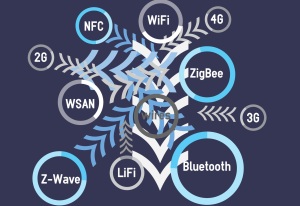 Big cloud service providers are already thinking about how to bring the Internet of Things together on an enterprise scale. IBM, Microsoft, Amazon, and Samsung (they’re obsessed with the IoT) have all developed platforms to help businesses manage their Things. This allows your business to create a single point of access, reducing their attack surface. Moreover, because these companies are in the business of data, their efforts to keep that data secure will always be cutting edge.

A centralised platform also means greater control. While the cloud may not discourage the collection of private data, it can make it much easier to control who has access to it, how it is used, and how securely it is stored.

The number of connected devices has grown from a few thousand beginning in the 1980s (think ATMs and pay-at-the pump) to an expected 25 billion by 2020. Most of these devices can be used to gather data that can be useful in making a business run more efficiently, says Lance Spellman, president at Workflow Studios.

Currently, most IoT data are not used. For example, on an oil rig that has 30,000 sensors, only 1 percent of the data are examined. That’s because this information is used mostly to detect and control anomalies—not for optimisation and prediction, which provide the greatest value. McKinsey

The amount of data made available by the Internet of Things is unprecedented. For companies to take advantage, they need a lot of space to store it and a lot of power to process it. Cloud storage provides a reliable, secure, and expandable option for the former while SaaS offerings continue to provide more and more options for processing and analysis. This ability to actually use information being gathered has implications for almost every other area of IoT concern.

There are a dozen ways for various devices to connect to the Internet and each other: 2G/3G/4G, NFC, WiFi, ZigBee, Bluetooth, WSAN, Z-Wave, good old fashioned wires. They are even developing technology (called LiFi) that uses light waves to transmit information. Unfortunately, most devices operate on a single channel, preventing them from interacting in ways that could be useful. The information they transmit comes to rest in a single-device app, and there is where the usefulness ends.

To deal with the first problem, the tech world has started to develop hubs (we know, yet another Thing) that are able to communicate through multiple channels and collect signals from a wide variety of devices, directing those communications through a single app. As these technologies become increasingly sophisticated, they will become more and more adaptable and can be made to interface with custom software designed to help make those communications more useful.

The ability to monitor precisely the amount of energy and bandwidth actually being used helps to identify areas where there may be waste and eliminate them. The reality is, most IoT devices use very little bandwidth to operate, if any. It is transmitting the data they gather that may require a bump in your connection. Uniting devices on a cloud platform allows you to reduce redundancies in data transmission, which may help to keep this under control.

On the energy side, though the cloud may not help you get around the need for more outlets, it can eliminate the need for more servers, one of the largest consumers of energy in an office. The datacenters that make the cloud possible are, admittedly, huge consumers of power, but they also have huge resources at their disposal to make the generation of that power cleaner and its use more efficient. This reduces the environmental impact and the cost of the energy needed to power your Things.

Knowing exactly what you need can help you predict exactly what back-up you need – what kind of battery or generator power, how much bandwidth to avoid maxing out. Centralised analysis can help you do that. What’s more, the cloud allows you to be flexible, which means that, even if the power at your office goes out, workers can keep working from other locations and still have access to the entire business. Even a total loss at your physical office leaves your data and operating systems secure and functional.

Monitoring and processing data allows you to easily see where automation has actually improved efficiency and where human hands and minds are needed to push processes forward and create more innovative approaches. Centralised control puts the technology in your hands, at your disposal, making it the useful tool it is meant to be. While we can’t claim that the cloud can keep computers from getting too smart, the clear picture it can provide of the landscape of our technology may keep us from feeling like we need an A.I. smarter than us to keep it all up and running. And if not, at least it could reduce the number of plugs we need to pull when it all goes to hell.

Robot icon by Simon Child, from The Noun Project, all other icons from pixabay.com

The author of this blog is Lance Spellman, president at Workflow Studios.