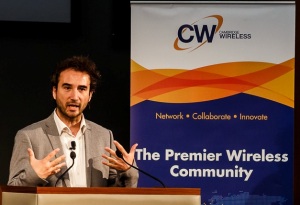 The Internet of Things industry is confusing need with demand said Mischa Dohler, Professor King’s College London and co-founder of Worldsensing, in an opening session at this week’s CW 8th Future of Wireless International Conference at the IET: Savoy Place in London.

“People don’t care about smart homes and smart cities, they care about better healthcare and less congestion,” said Prof. Dohler. This message was reinforced by other leading speakers from the worlds of entertainment, fintech, healthcare, retail, automotive, energy and utilities throughout the two-day conference.

“From a vertical market perspective the pace of technology change in IoT and nascent 5G can be daunting. What is becoming more important is a change in thinking to focus more on the demand side and identifying where the IoT can make a real difference, rather than just a technology push,” said Simon Fletcher, CTO at Real Wireless and Chair of the Future of Wireless International Conference (FWIC).

Presenting on Singapore’s ambitions to become one of the first smart nations, Steve Leonard, executive deputy chairman, Infocomm Development Authority of Singapore, said, “Smart nations’ biggest challenge is not technology it’s about changing mind-sets.” Arabel Bailey, managing director of Accenture Digital UK stressed the need for new and established IoT companies to become, “relentlessly customer focused,” and pointed to Uber as an example of an agile company that, “has been able to adapt, scale and disrupt rapidly to meet a fundamental customer need.”

For the operators, Jon Carter, UK head of Business Development at Deutsche Telecom, commented, “Telcos have recognised both the threats and opportunities presented by the IoT and are responding to the need for innovation and creativity to be at the heart of the consumer IoT ecosystem.”

Delegates to the conference heard from speakers across a wide range of vertical sectors and David Sharp, head of Ocado Technology 10x, explained how the company was harnessing wireless technology to deliver its massively scalable Ocado Smart Platform but also stressed the importance of having, “some level of standardisation for the connected world to grow and encourage greater adoption.”

From the automotive industry, Ian Simmons, vice president R&D, Magna International, explored the challenges for connected mobility and said that the automotive industry has changed more in the past five years than it has in the last 50. “Drivers of this change come from the sharing economy, stringent fuel economy and emissions targets, and advanced technology challenges of autonomous vehicles, connectivity and the IoT,” said Simmons. David Wong, Technology and Innovation Manager at SMMT (Society of Motor Manufacturers and Traders) highlighted one of the key barriers to connected vehicles, revealing that, “about 4,600 miles of British roads have no 2G coverage from any national provider – let alone 3G or 4G.”

Looking at tough IoT challenges in engineering, Paul Stein, director, Research & Technology at Rolls Royce highlighted many real world applications in aviation, nuclear and marine that are beyond the capabilities of current IoT/5G thinking. Speaking at the Gala Dinner, he challenged the wireless and electronics industries to do more to deliver the benefits of the IoT in harsh environments.

Steve Baker from TTP encapsulated the dangers of companies focusing too much on technology and not on how to monetise it, by drawing on the words of JF Kennedy: “ask not what we can do for the Things, but what the Things can do for us.”

Also at the conference, over 20 IoT start-ups demonstrated the value of access to new data sources and working together. 6 weeks of intense collaboration culminated in the Innovation Showcase, sponsored by Intel, and supported by Iotic Labs, Cisco, u-blox and the KTN. CW (Cambridge Wireless) presented awards to recognise some of the leading disruptive companies emerging in the IoT space. The winners were: Thales and Ogenblik for Best Collaboration; Trackener for Best Progress; MobiCycle for Most Commercial Potential; Open Energi for Most Transformative Idea; while Heartfelt Technologies won the award for Idea Most Likely to Benefit Society.

The strength of the UK tech community was underlined by Eileen Burbidge, partner at Passion Capital and Chair for Tech City UK, who said that she had, “witnessed personally the incredible blossoming talent in the UK tech sector throughout the whole of Britain – a real phenomenon.”

The two-day event closed with a debate hosted by the broadcaster Rory Cellan-Jones posing the motion, “This house believes that wireless connectivity will transform industries. Will the incumbents in those industries be casualties or victors?”. After passionate arguments from Jacqueline Davey, VP Enterprise and Commercial, IBM UK & Ireland for the incumbents and David Cleevely from Cambridge Angels for the new disrupters, the vote was too close to call and deemed to be a draw.

“While it may be some time before predictions of many billions of connected devices becomes a reality for consumers, it is clear that the early winners in the new connected world will be those who can identify real customer needs and drive disruption in vertical industries,” said Bob Driver, CEO at Cambridge Wireless. “These companies may be established players who are fast to adapt or agile new players – but the race is certainly on.”