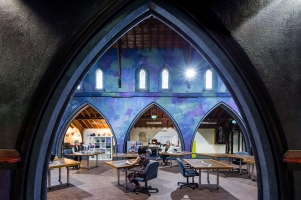 Speeds of up to 10 gigabits per second would be achievable if businesses invested in additional end-user technology.

The project supports the Adelaide City Council plan to become one of the world’s first Smart Cities.

“Data is the currency of the 21st century. If we were to have a city, which had quantifiably faster data speed than the rest of the nation, without at this moment pre-empting what the technological solution would be, what would that do to attracting business to Adelaide,” he said.

The rollout will use an existing SABRENet optical fibre network to connect specific technology parks, such as Tonsley, and the state’s bioscience precinct.

The network will also be connected in co-working spaces in the CBD of Adelaide, such as the St. Paul’s Creative Centre and Hub Adelaide.

Rob Fitzpatrick, the CEO of the Australian Information Industry Association (AIIA), said being a  Gig City will offer businesses internet speeds of up to 100-times the Australian national average.

“The need for speed will be more and more important as we transform into a digital economy. With increased broadband comes more innovation, more jobs, and greater economic growth,” he said.

“It’s not just the big end of town or research institutions that will benefit. Small businesses and start-ups drive a significant part of our economy and going digital provides them an opportunity to create new business models, improve efficiency, and get closer to the customer.

“Australia is currently lagging the rest of the world in delivery of true high-speed broadband. By establishing Adelaide as part of the Gig City network, the South Australian government has put a clear stake in the ground that they are serious about catching up and attracting investment, driving innovation, and generating real economic and social benefits for the state.”

“By giving tech startups and other businesses access to ultra-fast internet we can help them grow faster and attract entrepreneurs to South Australia,” Koutsantonis said.

Adelaide is  one of seven smart and connected ‘Lighthouse Cities’ in the world and the first in the Southern Hemisphere.

Adelaide is also the first Australian capital city to provide free public Wi-Fi, which has a download speed of two megabits per second, and is already rolling out other initiatives including smart lighting trials in the city centre.

The movement to 10Gb/s speeds in Chattanooga in the United States helped the city transform its struggling economy, by  luring high-tech start-ups to the city.