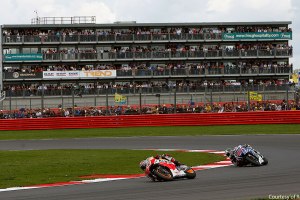 This smart transportation project was initially deployed to gain insight that would facilitate better traffic flow for visitors that attended the Silverstone Circuit, and to deliver a much improved all-round experience for future events.

Currently, traffic data that impacts traffic flow at the race circuit around major events is available, but in separate, fragmented silos that fail to give a holistic picture for race organisers and local councilors to collectively analyse.

oneTRANSPORT puts the pieces together. By analysing traffic data captured last weekend from Silverstone’s two surrounding counties, Buckinghamshire and Northamptonshire, the technology used in the oneTRANSPORT project was able to provide intelligence on how to better manage traffic peaks coming in and out of the British Grand Prix MotoGP™ event.

This latest engagement at the British Grand Prix MotoGP™ follows a successful trial at the recent British Formula One Grand Prix in July 2016. Again, the oneTRANSPORT project was able to measure traffic flows before, during and after the event in order to better understand how to optimise traffic flow. Further events planned at Silverstone over the next 12 months also have the potential to benefit from this detailed analysis.

“As one of the UK’s leading sporting venues, Silverstone Circuit attracts hundreds of thousands of visitors every year who arrive at the venue utilising a number of transport modes, and we are constantly looking for ways to improve our visitor experience, which includes the journey to and from the venue.

In order to improve the customer experience and as part of our evolving traffic management plan to accommodate our customers and provide accurate travel information, it is vital that we have the latest transport data available to us and our partners,” said Alex Lacey, head of Events, Silverstone Circuits Limited.

“Silverstone fully recognises the value that the oneTRANSPORT project will bring in the future, enabling strategic and local transport data to be made available via a single data platform. The potential to build on this platform and create tailored transport information solutions is of interest to Silverstone, and we look forward to continuing our participation with the project in the future.”

“The use of the oneTRANSPORT project’s technology at Silverstone is designed to provide greater access to, and analysis of, traffic data,” said Alan Carlton, vice president, InterDigital Europe. “All of the oneTRANSPORT partners have worked together to open up previously closed data sets that can help to reduce congestion and deliver a better travel experience for all at Silverstone. As the first step towards a live commercial deployment of the technology, we are thrilled with the results that we have seen so far.”

“We are firm believers in harnessing data and enabling technology to create new levels of convenience for organisations and the customers they serve,” said Tim Gammons, Global Intelligent Transport Systems leader, ARUP. “The oneTRANSPORT project offers a simple to use customer dashboard that clearly presents carefully analysed data to deliver maximum possible value to all concerned.”

The technology utilised by this integrated transport initiative is contributed from many of its participating members, and will be used to assist transport authorities while laying the foundation for smarter multi-modal, multi-region and multi-system transport networks in the UK.