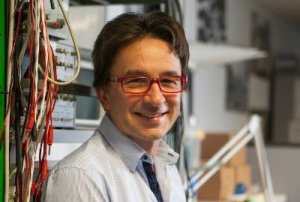 Telit, a global enabler of the Internet of Things (IoT), has announced the commercial availability of its BlueMod+S42 Bluetooth 4.2 module, and two variants of the popular SL869 single and multi-standard positioning module family, the SL869-V3 and the SL869-ADR.

The SL869-V3 and SL869-ADR are multi-constellation Global Navigation Satellite System (GNSS) receiver modules, each capable of tracking and using up to three constellations simultaneously to produce positioning, velocity and time information. The use of multiple constellations provides advantages over previous GPS-only receiver modules, including improved accuracy and a handling of weak or blocked satellite signals.

Telit also announced that it is collaborating with Wirepas to deliver simple and easy to use intelligent IoT networks. Its BlueMod+S42 platform is the first to embed the groundbreaking Wirepas Connectivity technology, a decentralised radio communications protocol that eliminates the need for traditional repeaters making every wireless device, a smart router in the network.

“We are extremely proud to be a Telit partner, as the company is one of the true frontrunners in Industrial IoT. Our product, Wirepas Connectivity being integrated by Telit, delivers an autonomous, device network that has deterministic performance at any scale. Together with Telit we can help our customers connect their devices with 24/7 availability and to innovate in products and services,” said Teppo Hemiä, Wirepas CEO.

“Earlier this year, Telit formed its Short-Range and GNSS business unit to deliver complete sensor-to-cloud or sensor-to-gateway-to-cloud solutions. These three modules and the partnership with Wirepas are great examples of what our new business unit will add to the Telit total IoT solution portfolio,” said Felix Marchal, executive vice president of GNSS and Short Range Wireless. “Telit now offers the most complete integrated set of IoT products and services – and unmatched IoT know-how – addressing the needs of the most demanding segments, such as automotive and industrial, on a global scale. The products we are launching here meet the stringiest Telit quality and robustness standards.”

Telit is also introducing new developer kits to enable rapid prototyping of solutions based on the new and upcoming modules. All three products follow the Telit tradition of excellence in radio-frequency (RF) design and performance in industrial-grade environmental conditions.

The BlueMod+S42 is a top-shelf single-mode Bluetooth module delivering a class-leading line-of-sight range above 800m. It supports Terminal I/O profile as well as most standard profiles based on the Generic Attribute Profiles (GATT). Terminal I/O works similar to the classic Serial Port Profile (SPP) and offers a simple point-to-point connection, including flow control over-the-air. The module supports Client as well as server roles. As Central, the module makes available a GATT client with support for up to three connections. At the same time, a Terminal I/O server connection can be used for a simple and versatile connection to a smartphone or tablet.

The module boasts very small dimensions (17x10x2.6mm) and is controlled by a simple AT command interface. It supports NFC handover functionality to simplify pairing and connection setup. The BlueMod+S42 is a member of the Telit Bluetooth module family. It is mechanically and electrically compatible with the single-mode BlueMod+S and the dual-mode BlueMod+SR. The BlueMod+S42 is CE, FCC, IC and KCC certified and qualified according to Bluetooth v4.2 specifications. Apps and demo source code for various types of applications are available for Android and iOS.

The SL869-V3 and SL869-ADR are powered by an ST Teseo-III GNSS core supporting GPS, GLONASS and Beidou constellations, capable of tracking Galileo satellites as well. They both contain embedded flash memory for program and data storage for added flexibility upgrading module firmware and configuring default firmware settings. Data communication with both modules is available via UART using a protocol based on the NMEA-0183 standard. Both modules support Assisted-GNSS using synthetic ephemeris generated locally within the module or server-generated files that can be injected into the module.

They are also capable of supporting differential-GNSS operation using corrections obtained from an SBAS satellite or RTCM data stream. For applications utilising an active antenna, both modules provide antenna monitoring, fault detection and status reporting. The SL869-ADR and SL869-V3 are packaged in the popular 16×12.2mm LCC form factor.

The SL869-ADR includes an embedded IMU consisting of integrated three-axis gyroscope and three-axis accelerometer. It processes data from the gyrometer, the car odometer (“wheel tick”) and forward/reverse indicator inputs, to perform automotive dead-reckoning. It processes data from the accelerometer to detect module tilt, for which it compensates when performing DR. The SL869-ADR can also be configured to accommodate several different installation orientations within the vehicle.

With an operating temperature range of -40°C to +85°C, the three modules are suitable for demanding applications and environments such as OEM automotive and industrial.

The Wirepas mesh networking technology is available on Telit Short Range Bluemod+S42 platform. Wirepas Connectivity is an intelligent mesh network for the Internet of Things. It delivers the benefits of automatic self-configuration while consuming low power.