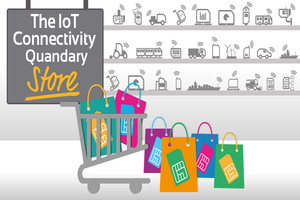 If there was any doubt over the pervasiveness of IoT then look no further than digital security expert Gemalto’s IoT Outlook 2016, and the stand out revelation that the market will account for some 50% of business revenue by 2020.

Along with industry forecasts which predict 50 billion connected devices in use world-wide by 2020, it’s a juggernaut that shows little sign of waning as a number of factors conspire to turn something once niche and mysterious into a tangible, mainstream reality.

Maturing 4G networks and the pre-eminence of IoT facilitating platforms bringing greater visibility to what is actually happening with a device are just a couple of the game changers responsible.

Indeed, many IoT projects, previously put on the backburner due to (justified) concerns over a lack of control and spiralling costs are now coming to fruition thanks to the ubiquity of IoT Platforms as a Service (PaaS), monitoring and controlling a SIM’s data usage across multiple networks through real time and contextually-rich decision making.

Yet for all the growing opportunities, this is still narrative with a sting in the tail; a traction tempered by challenges that will need to be addressed if the IoT eco system is to fulfil its obvious and lucrative potential. And as a space still defined by how easily everyday objects can talk to each other, connectivity and the perennial drive to optimise bandwidth and latency is perhaps the most prevailing of all.

Network choice is pivotal but complex, informed by multiple factors from the nuances of data use dictated by the particular application and its communication needs, legislative requirements and security to where precisely the information will be processed. Further considerations include whether to go for a roaming SIM that can provide multiple network operator access or if a local mobile operator will suffice.

For the uninitiated, it can be all too easy to underestimate this complexity, lulled into a false of sense of security by the familiarity of IoT in the consumer space, through the handsets and phones that introduced it into our lives before we even knew what term meant. When applied to the enterprise, complacency can creep in, but inserting a SIM card into a device and expecting the magic to happen or making decision solely based on the seemingly keenest quote from the mobile broadband provider won’t cut it.

In fact a focus on SIMs to the exclusion of all other components of the broader eco systems is an all too common and expensive mistake. It’s not unheard of for up to £50k ($62k) to be wasted on a choice of SIM that may have seemed the right option at the start of the project, but will need to be replaced further down the line as business and technical requirements evolve.

While large corporates will have the resources to get it right from the outset, with the smaller player it’s more likely to be trial and error which is why using a standard SIM is often at the start is a prudent choice until a better understanding of the market is developed and SIM requirements can be revisited.

Then there’s the battle to secure the best network option while facing the inherently siloed nature of how network providers operate and the lack of clear path to a follow. A modestly-sized operator with an M2M project can easily be denied access to the best network fit simply by not getting through to the most relevant division of the business to discuss their requirements or because they are not dealing with high enough volumes to be of interest to those only geared to handling larger assignments.

Like the proverbial square peg in a round hole, their demands are then shoehorned to fit into the particular network offering available as opposed to the multiple network options that are really needed to do the project justice. In practice this could mean that a customer wanting to launch a product in Germany, but committed to a provider with no network presence there, are then left addressing this shortfall with the extra costs and inefficiencies this entails, in effect starting from scratch.

That old adage about not putting all your eggs in one basket could not be more applicable here. Gemalto’s report bears out an industry-wide consensus that choice will be the lynchpin of IoT infrastructure, turning attention to the M2M aggregators whose raison d’etre is to optimise the network options and secure seamless coverage however dispersed or multiplicious the devices involved.

Here, the ability to offer private networks that act as overlay network for global mobile operators from Vodafone to O2, connected through one central management application can make all the difference. Providing multiple layers of functionality and value, security, scalability, flexibility with a speed to market and a global presence, it’s a move that covers all bases in a way that should extinguish the lingering doubts and confusion which continue to curb the IoT’s staggering potential.