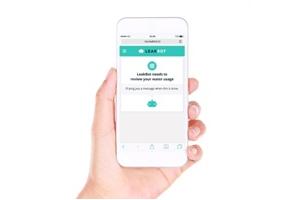 Leakbot app on an iPhone

HomeServe, a home assistance provider in the UK, is strengthening its partnership with general insurer, Aviva, with the news that Aviva is the first insurer to offer LeakBot to its customers. This is a smart connected water leak detector, developed by HomeServe Labs.

Water leaks are the second biggest driver of home insurance claims, making it a key issue for both customers and the insurance industry.

A leak in the home can cause huge disruption and heartache for householders. Damage can be exacerbated because a leak often happens out of sight, with water escaping slowly over a prolonged period, which means people frequently become aware of the issue after considerable harm has been done, taking weeks of upheaval to put right.

LeakBot aims to offer a solution to this issue, through its ability to detect leaks anywhere on the mains water supply in a home, spotting them before they have the chance to become big problems.

The award-winning LeakBot device uses Thermi-Q technology and is said to be installed easily by clipping the LeakBot to a pipe near the stopcock. It monitors the mains water supply 24/7 to detect and alert Customers via their smartphones to issues such as dripping taps, hidden leaks on pipes and taps being left running. Customers can then choose to access on-demand repair assistance from HomeServe.

Aviva has already tested a small number of devices, and the success of that initial trial has led the insurer to offer LeakBot to selected Aviva Customers. Martin Bennett, CEO of HomeServe Membership said, “HomeServe and Aviva are organisations who are both focused on making things easier for Customers. From the beginning of our partnership, we have been excited about what we will offer Customers in terms of market leading connected home innovation, and LeakBot, is a significant step forward on that journey.

“We know that water damage is a major issue for the insurance industry and their Customers, and LeakBot is a real game changer. To have a device like LeakBot that is easy to use and install, and can detect leaks to help avoid considerable damage to the home, is a real benefit for homeowners and insurers.”

Stephen Pond, managing director, Prevention and Services for Aviva commented: “Many people will have encountered a leak in their homes at some point, so it’s no surprise that repairing damage caused by leaks accounts for more than one in five of Aviva’s home insurance claims. Unfortunately, many leaks happen behind the scenes, which mean they can sometimes go undetected for weeks, months or even years, meaning water damage can be extremely extensive, destructive and disruptive to put right. So, catching leaks early and fixing them before much damage is done is definitely the way to go.

“We have been working with HomeServe on LeakBot for well over a year and have already carried out trials which told us that many homes have issues with their plumbing without the householder knowing – most of them are small problems for now but problems which, if left, could become big ones. We’re always exploring ways to prevent avoidable incidents from happening and to deal with them quickly when they do, so LeakBot together with HomeServe is a great example of how we’re looking to achieve this.

LeakBot was designed and created by HomeServe Labs, in Walsall, Midlands, and went on general sale earlier this year, priced at UK£149 (€164).