Home › IoT News › What does the future hold for open source hardware and software technologies in the IoT? 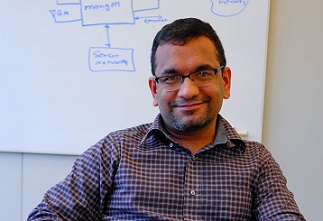 You have probably heard about open source hardware and software technologies for the Internet of Things. But what does it offer you, and your customers, and how could it benefit the IoT market?

To find out more, Jeremy Cowan talked to Ashish Syal, Principal of Engineering Advanced Technology in the CTO Office of Sierra Wireless.

Ashish Syal: One of the biggest challenges for IoT is the time-to-market as well as the investment needed to develop ideas into prototypes and eventually into commercial products. Before developing the next killer app, it can be complex to build the infrastructure and bring your platform up.

Taking this data from embedded device to cloud services is not always easy. Integrating the right protocols at the embedded side as well as the  cloud side is needed. On top of that, certification is long and expensive. Companies don’t try new ideas for the IoT if they are too expensive or take too long. We want to remove this barrier to the IoT. In fact, a number of ideas are not even tried due to this fear of failure.

IoT Now: What is different about the mangOH reference designs?

AS: Project mangOH has all the elements out-of-the-box to deliver 90% of your prototype. It allows developers to focus on application development and testing. mangOH targets the Industrial IoT. All components are industrial grade. It runs the Legato open source framework that guarantees high reliability and security for applications. mangOH has also introduced the IoT Connectors that are highly ruggedised modules that can be used by developers to not only build applications but can be readily deployed in end products.

AS: There are a number of benefits for the open source model. It allows the end user the freedom to not only use Sierra modules but another chipset on the platform.

The end user can customise the design using different IoT connectors and build applications to meet different market needs. For example, a customer can use a WiFi/BT solution or a ZigBee or a CAN module on the same mangOH platform. All the drivers are easily installed and sample applications are provided. For an end user, it is very easy to customise the products that they want to build.

Open source applications built using the Legato framework receive a lot more peer review, and that makes them secure as their strength is not hidden behind closed doors. Openness of application development allows a much more robust and secure design. The quality of the overall software and hardware is much higher.

The mangOH forum provides a much quicker review time than it would otherwise take. A lot of smaller customers are not given the same attention as big volume players. But a strongly built mangOH forum allows end developers to get quicker solutions. It allows end developers to fail cheaply and faster. They can try out a number of different ideas at a much lower cost than they could otherwise.

The platform is using open standards like LWM2M and MQTT for connecting to the cloud and this allows a very high interoperability with other enterprise solutions.

IoT Now: And what are the benefits for Sierra Wireless?

AS: The growth of developers using mangOH has allowed us to reach the mass market. A number of our large customers are using this platform and adding value to the community, this includes energy, telematics, and mobile computing.

Developers who might otherwise not have been able to touch and use our products are now getting access to our device-to-cloud solutions. As we grow this community, Sierra’s products can be used in newer vertical markets like robotics, drones, and wearables.

As we grow this community, Sierra’s products can be used in newer vertical markets like robotics, drones, and wearables.

IoT Now: Are you working with other organisations to deliver open source hardware  and software for IoT? If so, which ones and what do they bring to mangOH? AS: Yes, we have a  growing ecosystem around mangOH. We have worked with a number of semiconductor, module, and cloud companies to build this ecosystem.

Companies like NXP, Texas Instruments, Linear Technology were the founding partners for this ecosystem. Module makers like Talon, Renfell, and One Oak Design are contributing to the IoT module ecosystem.

We are also working with companies and organisations like IBM, TM Forum, Blynk, and Two Tall Totems to build cloud and mobile solutions. We have strong channel outreach through Element 14.

IoT Now: When will we see the results in the market?

AS: mangOH Green was the first platform for project mangOH. This was launched in May 2016 and we are seeing a steady growth with this platform.

mangOH Red is the second platform for project mangOH. This is being launched in  Q1 2017. We expect this platform to be the Raspberry Pi of cellular. Sierra’s AirLink FX30 platform which is being launched shortly is the industrialisation of the mangOH platform.

We have successfully shown that we can develop products around our platform. We also have a number of third parties who are actively building platforms using mangOH. This includes many vertical segments like after-market automotive, telematics, consumer, and security platforms. In addition, we will be hosting our first North America IoT Developer Day event in San José on 6th December, 2016.