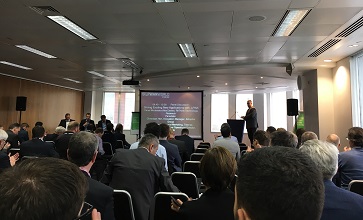 A key feature of the LPWAN World Forum held in London (November 10-11), were the stimulating expert panels. As Jeremy Cowan reports, the speakers opted to focus on the business case for low-power wide area networks (LPWAN) more than the technology.

Under the guidance of moderator, Alex Davies, analyst and editor at ReThink Technology Research, the three expert speakers concentrated on issues such as new applications made possible by LPWAN and how the technology can open up new business opportunities.

Christiaan Hen, innovation manager at the Netherlands-based airport operator Schiphol Group, was asked whether the best solution for his organisation was licensed or unlicensed LPWAN.

“I believe in an airport campus,” said Hen, “it’s best to have the flexibility of both, to have mixed technologies — licensed and unlicensed. Outside it may be straightforward to use LoRa, but LoRa inside brings issues.” (The LoRa protocol, LoRaWAN™, is an open global standard for secure, carrier-grade IoT LPWA connectivity. Ed.).

Speaking from the floor, Professor William Webb, CEO of Weightless Special Interest Group (SIG), asked: “What are the troubles you have with LoRa?”

The answer from Hen was simple. Two-way communications. It is, he says, a local problem in the airport, and just with some vehicles. He didn’t elaborate, except to say that the network provider is looking into it.

Asked to describe his company’s role in this sector, Keith Day of Telensa said, “We’ve connected one million street lights in 70 cities and industrial networks, which makes us the market leader.” He asked rhetorically, “Why have we taken the LPWA approach for contracts of 25-30 years? It (the solution) has to be bullet proof. Street lights are a cost and cities worry about money, they don’t have much of it.”

Dimming (of lights), centralised reporting and maintenance mean you can save money, he said. “But lighting doesn’t cost that much anyway, so margins are low. LPWA is all about the business case,” said Day. “You’ll get full management of your lighting and, for free, you’ll get a network you can use for other sensors. There’s no site acquisition and no license costs.”

“We work with different partners in different cities. For example, one might have a traffic sensor (on an LPWAN-connected street lamp) or another might collect air quality data, but it’s not fast stuff like video. Lamp posts are where people are, and where electricity is. We are about low bandwidth connection for lots of other things,” Day added.

One questioner wanted to know what the most unusual application was that the panel had seen on their networks. While not directly answering the question, Christiaan Hen showed the flexibility of the technology when he said, “Anywhere there are planned activities you can see new applications, or where you could lose stuff and it could be tracked. In the airport, people are always looking for wheelchairs. They know they’ll find one in the next five minutes, but they don’t know where they are. There’s a use case right there,” he said.

Fellow panellist, Nigel Devenish of Trak365, was enthusiastic about the suitability of LPWAN for monitoring flood levels and enabling early warnings to be given to vulnerable communities. The moderator, Alex Davies agreed, “These (applications) aren’t going to be addressed by an MNO (mobile network operator) like Telefonica with smart metering, but they’re high-value applications — evacuating a care home before floods arrive.”

Keith Day described how Telensa is involved in Demand Response for a New Zealand energy utility. “You get cheaper energy for allowing your water heater to be switched off for 1-2 hours. We’re involved in using a street light network to control smart meters for a short period to turn off water heaters. Street lights have to work 24/7,” he said, and drew a parallel with the critical requirement to reliably be able to turn water heaters back on again. “If you can’t do that you’re in all sorts of difficulties and dangers.”

The questioner persisted to the panel, “So, are you getting pressure to open up your networks to SMEs (small to medium-sized enterprises) or private developers?”

Telensa’s Day answered, “The cities own their networks, not us. So decisions to open up are down to them. We’re getting more and more cities, especially in the US, wanting to go further — for example, hooking up to local universities and innovation labs. Our networks are cheap and amazingly reliable, but it’s not for all applications. Sometimes you need a cellular network.”

Said Day, “Typically, the longer the application lifecycle it’s really just a business case and risk mitigation requirement. All our competition is private, mesh networks. I agree, you need a mix.”