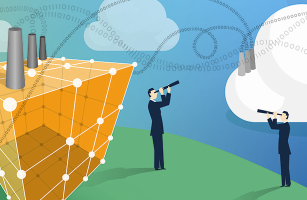 As the physical space drawing computing and core intelligence ever closer to the data source, the digital edge is far from being on the periphery in terms of traction and attention.

Indeed, says Philip Cole of Wireless Logic, with all the credentials to become the natural successor to the cloud’s status as the primary IT disruptor, it’s an increasingly central focus, born out by global research analyst IDC which cites that up to 40% of IoT-created data will be stored, processed and analysed at the edge of the network by 2018.

There’s a reason why; we know that if optimal value is to be extracted from data then intelligence needs to be readily accessible to the user and captured in real time, at its freshest state to drive immediate operational data decisions.

Decentralising the cloud and pushing data storage and processing to the most remote part of the network enhances agility and security by slashing the time data spends travelling across the network bandwidth and with it the potential for attack. With compute happening directly on the devices, the regular bottle necks caused as multiple devices communicate back to a centralised core network are consigned to the past and costs saved by filtering out the irrelevant data.

When analytics are added to the mix, things get even more interesting, with subsets of data collected and analysed before transmitting the results without the excess fluff. Unsurprisingly, traction is buoyant in the data-heavy environs of the IoT space, where more and more imaginative applications are demanding savvier and efficient ways of processing and transmitting the volumes of data generated.

And no better is this brought to life than in the context of industrial settings where data must flow between the myriad of sensors, devices, assets and machinery in the field, often in unstructured, challenging and remote conditions. Here, the digital edge can be a timely intervention, giving sensors the sufficient processing power to make the kind of mission critical decisions, which can’t afford to wait for data to be sent to a central cloud.

By making available architecture choices more nuanced, localising certain kinds of analysis and decision-making, and lowering operational costs, the edge is unlocking even more opportunity in this arena which empowers the end user and chimes with our own mission as an M2M/IoT solution provider. It’s why tapping into the expertise of edge gateway providers to enhance our connectivity offering has become a natural progression as increased data usage in remote devices becomes a norm rather than exception.

Indeed, we are seeing first hand across the hundreds of vertical applications we work with including asset and vehicle tracking, telematics and range of enterprise solutions how readily the IoT edge is being embraced as a business enabler. The rapid rise of sensors, both physically hardwired, built into the product, or communicated via a short-haul communication protocol like Bluetooth Low Energy (LE) or ZigBee bears testament to the increasing demands and sophistication of the technology used.

Take vehicle tracking providers, where data use is steadily rising as the use of dash cams and secondary applications like refrigeration units become evermore more mainstream. Where maintaining optimal temperature of shipments throughout the journey is a priority, collecting data fast and flexibly in a gateway solution is a major bonus.

All in all, it makes for a compelling case, but of course, the complexity of IoT ecosystems dictate that it is not just about getting data to the brink and job done. Firstly, there’s the question of which approach is best to facilitate it. Dumb devices deployed in the field with more sophisticated hardware saved for further up the communication chain is a common occurrence, but whether or not low cost routers will suffice or a greater investment needs to be made in hardware on the edge is still up for debate.

It’s a choice and potential confusion that can catch people unware and demands intervention, but broadly speaking, those prepared to invest in the edge will see the initial costs offset by the speed and efficiency gains as the need for additional systems needed to support dumber devices with data transfer and insight gathering is negated.

And there’s a more fundamental question of all. In spite of the obvious credentials, it seems there are those who still need to be convinced of the merits of the edge with the issue already polarising the views of two IT industry scions we’re speaking to. In the one corner is the belief that the edge will become the natural home for all technology and a principal source of revenue generation while in the other, an assertion that all costs associated with connectivity will come down to such an extent that locating system intelligence in the central cloud will still be a perfectly viable and preferred option.

Perhaps in reality with the complexities and choice that define the IoT space, it’s a debate that is never going to be that black and white. Most likely, a hybrid of the two will prevail with the sheer processing power of the central cloud ensuring it still has a role to play. Crucially though with ever more action at the network layer, more decisions will need to made including the supporting platforms that can manage multiple level access, visibility and SIM management if the connectivity conundrum is to be truly solved.