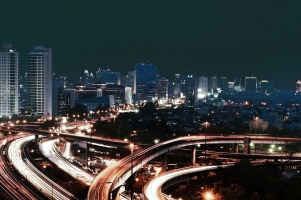 There are currently about 282 million street lights in the world, and this number is expected to reach 338.9 million by 2025. Street lights account for approximately 40% of any given city’s electricity budget – which can amount to tens of millions of dollars for larger cities.

What if those lights could be made more efficient? Dimmed at certain times, says Mike Holt of gridComm, turned off completely when not needed, etc. – the point is, those costs can be reduced. Significantly.

Connectivity is key – cities can be made smarter by connecting street lights into a network. One method is to install network adapters into every street light – whether it’s a high pressure sodium vapour luminaire or an LED – and then repeat this throughout the city. This enables the central monitoring and control of all street lights, which can save cities millions of dollars in electricity costs and reduce their overall carbon footprint.

Take Singapore, for example. Singapore has 100,000 street lights and spends US$25 million on electricity every year. By implementing the system described above, Singapore can connect those street lights for between US$10 million and US$13 million, and once connected, can save approximately US$10 million a year. It would take a period of about 16 months to start realising a return on investment.

Inefficiencies arise when systems are not interconnected. Beyond energy savings and emission reductions, smart street lights enable the implementation of predictive maintenance. Being able to monitor a city’s pulse with real-time data means that hardware failures and faults can be immediately detected and even anticipated in advance.

Removing the need for human engineers to perform scheduled physical checks on-site can also greatly reduce a city’s repair and maintenance costs while optimising the lifespan of its hardware. There would no longer be a need to employ people full-time to drive around the city after dark looking for burned out lights, for example.

Think about this – consider a street light located next to a billboard that is lit up for several hours. The streetlight may not be needed while the billboard is lit up. A huge advantage of having sensors connected to a network is that they can update in real time as conditions change. They also can be adjusted as needed to provide more lighting in high crime areas or areas where there is a history of traffic accidents, etc. Street lights can be adjusted on an individual basis (via their IP addresses) to run at different levels of brightness, shut off or turned on at certain times, etc.

But – there’s more. Once the platform is connected, it can be spread to other communications.

The author is of this blog is Mike Holt, CEO, gridComm