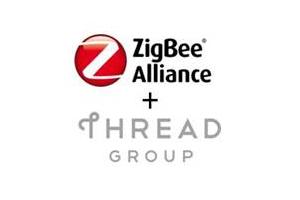 The ZigBee Alliance, an association of companies creating, maintaining and delivering open, global standards for the low-power wireless Internet of Things (IoT), and the Thread Group, an organisation focused on making Thread the foundation for the IoT in the home and beyond, report that multiple members of both organisations have demonstrated prototypes running the ZigBee Alliance’s universal language for smart devices on Thread networks.

The demonstrations, shown privately at the Thread Group’s Members Meeting in November and set for public display in both organisations’ booths at CES, are a key milestone in their liaison agreement, and highlight accelerating momentum behind an emerging ecosystem of connected products that will interoperate over Thread IP networks using the widely deployed ZigBee language.

“As our two organisations near completion of our respective product development solutions that bring the ZigBee universal language to Thread networks, multiple members have already demonstrated the value of this liaison agreement and its promise for delivering a consistent product experience over IP networks,” said Grant Erickson, president of the Thread Group.

“That we have so quickly reached the technology demonstration stage, with many product, silicon and solutions providers participating, is clear evidence that market demand is driving interoperable IP-based technologies. Our members are working hard to meet this demand, and as a result of their early investments, their product development cycles are well underway.”

The Thread Group and the ZigBee Alliance have worked to coordinate their roadmaps for specifications, branding guidelines, and test and certification programs for smart products speaking the ZigBee language that run on Thread’s IP-based networks.

The Thread 1.1 specification is currently available to members, and the ZigBee Alliance will announce details at CES for their solution that enables their universal application language to run over Thread. This will be followed by completion and launch of their test, certification and branding programs. In addition, the organisations will collaborate to enable concurrent certification to simplify the process for product vendors that want to leverage both technologies.

Already deployed in hundreds of millions of devices worldwide, the ZigBee Alliance’s universal language standardises application-level functionality for a wide variety of devices used in smart homes and other markets. The liaison agreement to bring this language to Thread networks is the first step in unlocking its value for driving interoperability throughout the IoT across numerous types of networking layers.

Thread is a wireless networking protocol that can support multiple low-bandwidth, IP-based application protocols to provide secure and reliable networks, simple connectivity and low power in the home and beyond. Both organisations remain committed to their independence while cooperating to benefit their respective members.

Members of both the Thread Group and ZigBee Alliance enjoy early access to specifications and tools, and have opportunities to participate in and influence standards development and marketing, and take part in technology demonstrations that drive the future of the IoT.

Product vendors, developers, and retailers interested in learning more about Thread and ZigBee technologies, and becoming members of each organisation, can speak with representatives of the organisations and member companies at CES, January 5-8 in Las Vegas.