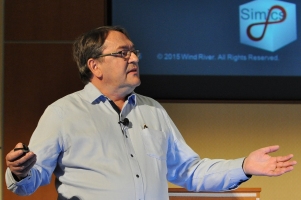 The Internet of Things (IoT) promises to enable a whole host of new applications and services. Powered by an army of ‘edge node’ sensors and actuators and omnipresent connectivity, the IoT looks set to have a dramatic affect in our lives, whether at home, in our car, our offices and factories.

While there are a myriad of possible use cases, most experts agree that IoT will initially have the most transformational influence for industrial applications.

In fact the widely adopted phrase industrial internet of things (IIoT) recognises the contribution that IoT is anticipated to make in terms of making industrial and manufacturing operations more efficient and productive. Other aspects of IIoT include use in smart buildings and transportation assets such as trucks and forklifts. For them efficiencies are gained through preventive maintenance and other asset management initiatives, says Michel Genard, general manager, Operating Systems, Wind River.

According to management consultancy Accenture, they estimate that the IIoT could be responsible for adding up to $14.2 trillion to the global economy by 2030.

In many ways the IoT is open-systems reality. The need to connect hundreds or even thousands of embedded sensors and similar devices through gateway data aggregators to cloud management and analysis platforms and back again relies upon interoperability, and for that to work standards are crucial. In a 2014 report commissioned by the World Economic Forum titled “The Industrial Internet of Things: Unleashing the Potential of Connected Products and Services”, 65% of respondents cited lack of interoperability or standards as a potential barrier to businesses implementing IIoT. Moreover, many of the successful suppliers involved in IoT recognised early on that their approach to IoT had to be an open and collaborative one. Gone are the days of attempting to architect a proprietary solution as a way of commanding a dominant market position. The scope of IoT is so broad no single supplier could achieve that, especially at the rate that IoT deployments are being made. Collaboration with other technology and service providers, all respected leaders and innovators in their fields was going to be key.

Many types of standards are required of course, some of which are familiar such as those for wireless communication protocols like Wi-Fi and Bluetooth through to IoT messaging protocols such as MQTT and CoAP. CoAP is perhaps a good example of how the IoT industry is collaborating to tackle the technical challenges that small compute resource-constrained embedded microcontroller sensors present.

Unlike in the world of power hungry high throughput enterprise IT computing environments, the small devices on the edge of the IoT world are the complete opposite. Typically battery powered, these essential devices form the fundamental data sources of the IoT and need to chatter away for years without intervention.

Improved operational efficiencies and cost savings are made possible through the real-time analysis of data. And most IoT deployments will generate lots of it. Trends, anomalies and incidents can all be identified and, in some cases restorative actions taken based on pre-defined rules

The cloud-based analysis platforms provide a secure, scalable and resilient repository for data generated from which systems can take controlling actions, establish trends, and in the case of preventive maintenance, highlight the need for a service engineer to inspect, for example, a bearing in a conveyor belt motor. An example of one of the leading cloud platforms is IBM’s Watson IoT.

Watson IoT is based around the IBM Bluemix cloud computing platform and helps customers to make sense of the data their IoT sensors are generating. A cognitive solution that brings artificial neural network “machine thinking” techniques to IoT data, it can decide how to structure data and provide insights to how efficiently a process or operation may be functioning. For developers of IoT solutions, particularly those designing the edge node sensors and devices, there is a desire to quickly bring their product to market. The market acceptance and widespread adoption of a smart sensor product relies on developing a device that is 100% reliable, can interoperate using industry standard products and offers the highest levels of security.

A further demonstration of industry collaboration taking place, in this case to ease the development of IoT devices and their connectivity to cloud platforms can be seen in the recent announcement from Wind River and IBM. The joint initiative has resulted in a version of Wind River’s VxWorks real-time operating system (RTOS) client that provides connectivity direct to IBM Watson IoT.

The results of this combined effort helps speed the embedded software development process for edge nodes, since the core operating system of the device will have native IBM Watson IoT connectivity built in.

Collaboration and partnership by technology providers ensures that the operational and efficiency benefits promised by deploying IIoT solutions can be rapidly achieved.