When making things smart is actually a dumb idea... - IoT Now News - How to run an IoT enabled business 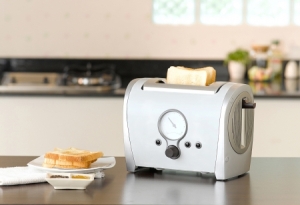 It is funny how we think sometimes, says Larry Bellehumeur of Novotech Technologies. In a world that is already complex, we seem to find ways to make it more complex, but do so with the thinking that we are making things easier.

Take a toaster. For decades, it has been used to make toast. When it was done, it pops up. Set it once how you want it and the vast majority of the time, it makes toast just to your liking.

Now, “to make things easier”, we choose to make it more complex. We’ve put on a bunch of settings, some have timers and I am sure soon, some will send you a text when it is done. The idea behind these changes is to make things easier, but in fact, we have built devices that now have more things that can fail. We’ve kind of done the opposite of what we intended.

So, why do I bring this up?

As a frequent traveller over the years (likely close to 2,000 flights or so in my life), I know the importance that having decent luggage can bring. You can “over pack” it when you need to, you can get a longer life out of it and it maintains its look for longer. So, combining that with the fact that I am a bit of an IoT nerd, I was checking out BlueSmart‘s new smart bag.

The idea of the Smartbag is to solve many of the issues that travellers have by using technology. First, the bag has a built-in scale, so that you may know when you are getting close to key weight limits while on the road. Next, it helps you locate it when it is lost, even partnering up with Uber. Finally, and the key to this story, it has an embedded battery that allows you to get power for your key devices when no plugs are available.

First, I hate it when my business partner, Richard Hobbs, is right. He is simply one to remind you of this fact for a bit too long… However, he is right in this case. Richard mentioned that the internal battery might be a concern for some airlines. While I wasn’t sure, I would have figured that BlueSmart would have done their research on this.

It turns out that there are a number of wires running through the bag, in addition to a large rechargeable battery. While I am not sure about what issues having that large of a battery on-board a plane might cause (in terms of heating/explosiveness), I do know that the combination of a large battery and wires is one that I would think might cause some issues with TSA, and in this story, it did. In the end, the writer was able to leave without issue.

It makes you wonder if every airport in the world will be so forgiving.

While I do like some of the benefits that a bag like this might bring, I think I will stick to my old-fashioned bag, you know, the one without a large battery in it.

I think it is an idea that may work well in the end, but it goes back to my toaster story. Sometimes, the most basic design is really the best and many things don’t need to be made smarter just for the sake of doing so.