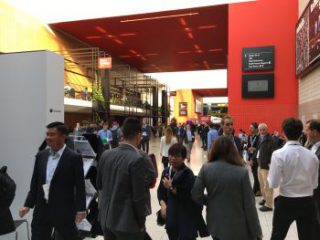 REVIEW: Events like last week’s Smart IoT London (March 15-16, ExCeL, Docklands) can be a salutary reminder of how far the Internet of Things (IoT) has come in a few short years. But they also show how much work remains to be done, says IoT Now‘s editorial director, Jeremy Cowan.

We’ve been reporting on the meteoric rise of interest in Machine-to-Machine (M2M) communications and the IoT for seven years on this site (and before that on our sister site for Telecoms IT, VanillaPlus.com). Day after day here we bring news of new technologies, applications, business models and IoT deployments, so it can come as a momentary shock when educated people ask “What is IoT, and what can it do for me?”

It’s worth remembering that if this ‘industry’ was a child it would still be in short trousers, and just starting to ask those difficult questions. You know, ‘Where did I come from?’, and ‘Can we have faster Internet?’.

There’s a temptation for anyone who’s been working in IoT for a while to think it’s always been here, everyone ‘gets’ what it’s about, all industries know they need to use it, and that it’s probably only a matter of months before every ‘Thing’ is connected. Well, of course, the answers are; it hasn’t, they don’t, far from it, and don’t be ridiculous, Jeremy.

One of the first stands I visited at this year’s show was shared by IoT hardware manufacturer, Aaeon and their distributor partner, Review Display Systems Ltd (RDS). The latter’s sales director, Graham Smith, said that one of the most common questions is, “How do we connect our machines?” This is fairly fundamental. I had expected that many enterprises’ would have moved beyond this stage and that they would be developing a 5-year structural plan for their connected factories.

No, it seems that in industrial IT (IIoT) manufacturers still have problems getting data out of their existing machinery. In most cases, they don’t yet know how to make their equipment talk to them. Of course, there’s no shame in that, that’s what this “industry” exists for and it’s only a few pioneering manufacturers that were embracing SCADA (system control and data acquisition) systems a decade ago, or using cellular connectivity for telematics 20 years back. While RDS could talk about a new deployment of automated cattle-milking machines, this was turning into a useful ‘feet-on-the-ground’ day for your correspondent.

Darren Chapman, sales manager at the London office of IoT solution provider Advantech added to my ‘re-calibration’ of expectations. “We want to help people put Proofs of Concept (PoCs) together,” he said. “People are learning what IoT is here. There’s more and more knowledge about it. They want to make their plant more efficient or to know where products are. They ask how do we get data, or say we have the data but we can’t use it.” For example, in retail, it’s about converting footfall into loyal customers, or IoT can be vital in stock management.

Nexiona, a Barcelona-based company describes itself as ‘IoT Connectocrats’. I’m still not entirely sure what that means, but UK sales director, Jeff Stewart said that they are creating a framework on which others can build their IoT platforms and applications. The challenge for Nexiona’s system integrator (SI) customers is to be able to build applications that can be replicated in different settings, whether they are in-house or in the cloud. “We help them build a platform and put it where they want,” he told IoT Now. “Yes, it makes it possible to Lift & Shift platforms — they aren’t tied to IBM or Amazon. We provide the software to allow SIs to build their own platform. We ‘white label’ it to them, but it’s a Nexonia framework.”

Frustratingly, some of the larger IoT vendors with great stories of their own to tell can get tied up in concerns about talking to semi-housetrained journalists like me. So, although they were able to talk to anyone else who strolled onto their stands, I can’t tell you what AT&T or VMware had to offer at the event. No-one was cleared for media briefings. Hopefully, we can put that right on another day.

Systems integrator, Capula Ltd (an Imtech company) describes IoT very fairly as a new methodology for doing the same job as before. Now, says Dave Robinson, market development manager, SIs can deliver telemetry, SCADA, and any industrial data to your mobile — and not just on Windows. Their cloud-based portfolio of software can be customised for all industries.

Capula’s configurable OPUS building performance management (BPM) solution is a new development that follows years of experience in energy management for utility customers. They use a PTC platform and are technology-agnostic with open protocols. “(BPM) covers areas such as HVAC (heating, ventilation and air-conditioning), fire, security and other systems. Yes, they’re all siloed, but we’re asked to aggregate all these data feeds into a single dashboard view,” said Robinson.

With 57 organisations exhibiting (in roughly double the space of 2016), the event has come of age and there was a palpable buzz of activity on the stands. The conference programme filled two days with concurrent streams on Industry, Enterprise & Cities;  Platforms, Connectivity & Devices; Security of Things; Data Management, Integration & Warehousing; IoT Workshops, & Innovation Launchpad.

I don’t want to leave you with the impression that it was all early stage investigation of IoT by visitors to Smart IoT London, far from it. So let the last words go to Gordon Gielis, technical director of IoT Billing Solutions, an Aussie-based company that is now doing rather well in the US, NZ, Singapore and most recently the UK. Sure, there are still stand visitors who say that they’re involved in smart city PoCs or other government research projects and have no need of a billing solution. But for those who have to survive in a commercial reality, his company now aims to support them “from device to cash. A lot of our MVNO )mobile virtual network operator) customers got into M2M billing 20 years ago. It was SIM-based. Now, equipment manufacturers want to turn their hardware sales into a subscription-based business model — anything that reduces risk for customers, for example, with part payment up-front and part on a transactional basis,” said Gielis.

To me, that smacks of a maturing business sector; IoT solution vendors are listening to their clients’ needs and refining their offering to eliminate reasons NOT to do business. Yes, there’s still a lot of experimental work going on in IoT — that’s a good thing — but this was a show where IoT end users were being guided to larger and smarter deployments.