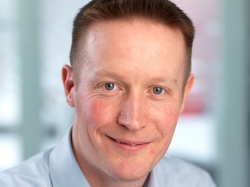 Moore’s law has been famously increasing the computing power at our behest, and has helped power the third industrial revolution of information technology and digital services. Many suggest that we are now at the beginning of a fourth industrial revolution, powered by connecting ‘things’, other than just computers and phones.

Cambridge Consultants has been looking at some of the simplest of these things; those that could be deployed in the highest volumes. We took our ground-breaking all-digital radio technology, capable of supporting a wide range of radio technologies including flexible 5G networks, and looked at what it could do for simple, low cost devices.

The answer was that Moore’s law has enabled us to make the silicon so small that the design becomes dominated by the other components. These surrounding components – like batteries – have seen little if any improvement compared with the silicon. Many simple devices today are using coin cell batteries that have improved little over the last decade, says Rob Milner, head of Connectivity at Cambridge Consultants.

Now that Cambridge Consultants has demonstrated how to remove significant cost from the radio and processor – our focus moves to how we can simplify the overall device, to reduce the number of manufacturing steps and parts that need to be assembled together, in order to bring the remaining cost down.

This is one of the reasons that we’re investing in synthetic biology; if we’re going to make a trillion IoT batteries we need to be using more environmentally friendly and abundant materials, such as those used in bio batteries.

Cambridge Consultants believes that the minimum viable IoT product must have some simple sensors that can detect conditions such as temperature, physical breakage, liquid levels or touch, combined with permanent power to allow this data to be processed regularly. Secure communications to the cloud can then use a phone as a gateway, to keep costs down.

A Bluetooth beacon is the simplest product that will fulfil our minimum viable product requirements. Architectures such as Google’s Eddystone show how beacons can be used to send telemetry back to the cloud in a secure manner, allowing companies to protect their investment in getting devices out into the field and to commercialise the data that they generate.

This design approach is a critical part of these low cost, high volume deployments which are currently limited by today’s device costs, which themselves are driven by a large number of sub-components.

A separate secure connection to the cloud not only protects individuals’ privacy, but also allows deploying companies to specialise in integrating this technology into a range of everyday objects, commercialising the information that they gather in a scalable way.

This is a new product category that is simpler than today’s Bluetooth devices, but offers more features than the lowest cost technologies (such as RFID, which often require costly infrastructure deployments). We’re showing what the first generation of this new category of devices could look like.

It already has some distinct advantages over existing technology but we believe that further improvements will rapidly follow to add more features and improve performance.

The author of this blog is Rob Milner, head of Connectivity at Cambridge Consultants