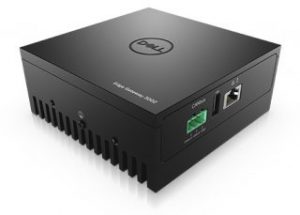 INTERVIEW – Prior to Dell’s October 2015 acquisition of EMC in a cash and stock deal worth US$67 billion, the company’s profile in the Internet of Things (IoT) was modest, writes Jeremy Cowan. That’s changing now.

Then Dell EMC’s CEO, Michael Dell, sat down with his team to examine how their IoT offering could expand as part of their broader strategy. How, he asked, should Dell EMC find the best fit for the merged entity’s skills in the Internet of Things? According to Dermot O’Connell, vice president of OEM and IoT Solutions, EMEA, the answer was a focus on three key areas; products, partners, and their go-to-market team.

Fast forward 18 months and there’s news of the imminent launch of the Dell Edge Gateway 3000 series, designed to enable real-time local decision-making about the operations of IoT-monitored machines.

O’Connell suggests that edge analytics was not getting the industry support and focus it merited. Here was an opportunity for a company with Dell EMC’s combined IT and enterprise expertise to enable users to process sensor data at the edge of the IoT network, instead of sending it to the core for analysis. This would enable enterprise clients to curb their bandwidth demands and reduce security concerns surrounding data transmission to the core network.

With the Edge Gateway 3000 series, Dell is – as the name suggests – now offering enterprise customers data analysis at the edge of their IoT network. The Dell Edge Gateway 3000 models are tailor-made for specific mobile and field use cases within the IoT in manufacturing, transportation and energy.

Smart gateways can improve the IoT

Built on system-on-chip and dual-core Intel® Atom™ processors, Dell’s intelligent gateways collect, aggregate and process data from wired and wireless sensors at the edge of an IoT network. They provide real-time reactions and relay critical information to back-end systems. The new 3000 Series runs on DC power or Power over Ethernet (PoE), and offers power-saving sleep/hibernate and wake on ignition for transportation uses.

Users can network the Edge Gateway 3000 via Wi-Fi, mobile 4G LTE in the US (3G in the rest of the world), 10/100 Ethernet or ZigBee (3002 Model). Each 3000 gateway features wired and wireless network connections to extend more IoT applications to the network edge, such as e-Logs and predictive maintenance for trucking, energy micro-grids and point-of-sale kiosks. All the gateways have GPS, accelerometers and atmospheric pressure sensors built in.

To achieve the 3000 Series compact frame, Dell traded off broad input/output (I/O) to focus on target use cases. The company has ruggedized its design to withstand shock and vibe. The 3001 model supports general-purpose, single-application manufacturing automation and energy management. The 3002 model fits under the dash of a truck or bus and includes a CAN bus. The 3003 model is intended for media uses like streaming video, audio, and retail kiosks.

So, who are Dell EMC working with in IoT?

One customer cited by O’Connell is IndigoVision, a global developer of open, end-to-end video security solutions. These solutions include video management software, HD security cameras, and network video recorders (NVRs). In short, IndigoVision is the type of IoT solution vendor for whom the ability to offer real-time analysis of large amounts of data at the edge of the enterprise customer’s network could be mission-critical.

Scotland-based IndigoVision also wanted to be able to offer its clients a range of storage options for its IP video surveillance systems. By working with Dell OEM Solutions, it can now provide its network video recorders on Dell PowerEdge servers, with optional Dell Storage MD-Series or cloud-based storage.

There are several benefits to this approach:

IndigoVision brings an Internet of Things approach to its customers’ security needs by integrating IP video into a ‘total security solution’. Since it was founded in 1994, the company has grown into a global business and now has 15 regional centres, support structures in 30 countries, and a network of 500 trained systems integrators to provide local installation and service to end users all over the world.

IndigoVision has seen significant growth while demand for surveillance systems has increased. One example is its FrontLine system of body-worn cameras. Wearable security systems are increasingly popular, with strong interest coming from police departments. Like many of IndigoVision’s systems, the cameras compress the captured video before sending it to a central NVR. Until recently, IndigoVision built its own NVRs from individual hardware components. It would then install its own software and ship the devices, along with the cameras and associated hardware, to its end customer – usually a security systems integrator.

IndigoVision is now partnering with Dell to offer a range of video storage options to its customers. CEO, Marcus Kneen says: “We’re experts in video and linking together disparate parts of security systems. Dell are experts in storage. Together with Dell, we have capabilities far beyond our core products.” His company bases its NVRs on Dell PowerEdge servers with specification and size tailored to the project needs.

If a customer requires greater storage capacity than can be delivered through Dell Storage MD-Series arrays. “With Dell, we can scale to meet our customers’ requirements,” says Kneen. “Dell Cloud Services could even be involved if it was a large bid, requiring off-site storage.”

Underscoring O’Connell’s comment about the importance of partnerships, Dell EMC is working with IoT platforms experts such as IMS Evolve in cold chain machine management and process automation. IMS Evolve has been working with food retailers worldwide for more than a decade. Thousands of cold stores are actively managed and billions of data points are being used in real time to inform operational processes.

To send large amounts of data to their customers, they needed a “solid platform” says O’Connell to work with GE Predix and Microsoft Azure. “We didn’t want to reinvent an IoT (edge computing) solution,” he adds, “but we’re not believers in a generic IoT platform. Our team came in here, spending a lot of time bridging IT and OT (information and operations technology). We’ve done this forever.”

IMS Evolve gives a single view of the cold chain, reducing waste, and assuring high-quality produce for customers. Manufacturing and processing environments can be regulated to maintain consistency of ingredients and data from each stage of the process can be united to optimise quality, most and profitability.

Utilising the IMS Evolve IoT solution, customers can now tap into data locked within legacy machines. By real-time integration with supply chain and merchandising systems as well as the fridge control systems, not only can energy consumption be reduced, but a higher quality product can be achieved, resulting in a better customer experience.

“We find ourselves in IoT in an amazing number of ways,” O’Connell tells IoT Now. “You can’t buy a ‘box of IoT’, early attempts at proofs of concept went nowhere. In the cold chain world, it’s refrigeration of tomatoes brought to you in winter – right product, right time, to the right customer means you can change the world. Building management and transport are also interesting to us; we’re excited about retro-fitting (computing) in commercial vehicles – vans, lorries, trailers, pumps — also in the autonomous car. There’s a market for a secondary computer, be it for telemetry or mapping where people are.”

It may not have been loudest in this space, but it seems Dell EMC is at last finding its voice in numerous industry verticals.