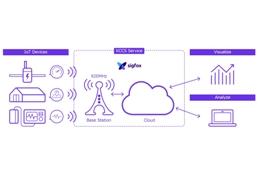 The service is now available in Tokyo, Kawasaki City, Yokohama City and Osaka City, to be further planned for Japan’s 36 major cities by early 2018 and nationwide by 2020 with an annual sales target of JPY10 billion by FY 2021.

The IoT market continues to grow worldwide with the number of connected devices estimated to reach around 53 billion by 2020. However, there continue to be barriers to mass adoption for use in locations with no electric power source, especially for applications such as sensors with extremely low data volumes.

In order to address those issues, KCCS is deploying the Sigfox LPWA (low power wide area) network which brings a breakthrough IoT solution with the lowest costs and longest battery life — two barriers to entry for many companies in Japan seeking to leverage mass IoT.

This partnership marks the first availability of the Sigfox network in the fast-growing Japanese market, which is the third largest IoT market in the world behind the U.S. and China.

KCCS has formed partnerships with around 70 companies from various fields such as device makers and IoT service providers.

The Sigfox network will target the following IoT services and applications in Japan: