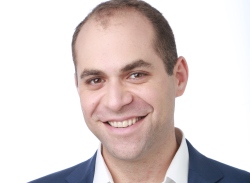 An astronaut of course, for the discovery and adventure!  I settled for a private pilot’s licence. To me the cool thing about flying is the ‘invisible complexity’. Engines, rockets … all of the motion is encased in the hull. All you see is this motionless building moving through the air.

2. If you had one business lesson to share with your younger self, what would it be?

3. Which Internet of Things Use Cases recently fired your imagination?

Google‘s Project Loon – a mesh network of balloons that floats over sparsely populated areas, beaming down internet to them. The balloons manage the jet streams, motion and landing on their own. They’re capturing an enormous amount of data – about weather patterns, pollution, etc. and it’s solar-powered so there’s zero carbon impact.

I was born in Lebanon and my studies, travel and work have taken me to 45 countries. What strikes me most is not the differences, but just how similar people and things are. On the way to the Sochi games in Moscow’s Sheremetyevo Airport, wearing my headphones, I was struck by the way the people looked and interacted – it could just as easily have been New York City.

Another time in Tiananmen Square, I saw so many similarities to Washington DC – the same structures and everything. I guess there’s something like a federal architecture that’s a standard in all global superpowers.