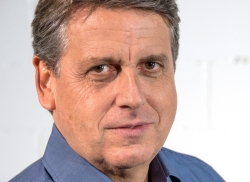 My generation was fortunate enough to see an unbeatable challenge achieved. I was a child when the first man walked on the moon. It was an extremely inspiring moment and hence an exciting “job” to go for. So, my single strong dream was to become an astronaut. In it, a natural interest for the unknown, the attraction for the infinite possibilities, the adrenaline of the risk, and the futuristic flavour of a modern hero life.

2. If you had one business lesson to share with you younger self, what would it be?

Travel, live abroad, learn the world and its languages, meet people, understand cultures and you will be able to master all possible business situations, catch all opportunities and resolve all issues. You’ll be faster, smarter, lighter and you’ll fly higher than anyone else around you.

The perception that IoT as we see it now is just the first step of a complete transformation of the world as we know it. Through IoT, the notion of the space in which we live is transformed, and it just started.

Somewhere in the near future, we are not going to be in a building any more, but rather in an intelligent one; we are not going to travel in a car or a bus any longer, we are going to be in a self-guided vehicle; we won’t work in a factory, but rather in a smart one; and what used to be static and dumb, a wall, a chair, sidewalk or a window for example, will be intelligent and “dynamic”. It is the pervasiveness of IoT itself that is the ultimate use case.

4. What lessons have you learned from doing business in other countries and organisations?

Three lessons above all the others: