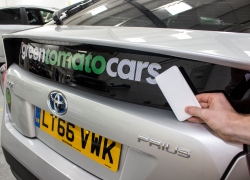 Drayson Technologies and London’s largest environmentally-friendly private hire service,Greentomatocars, have partnered to create a mobile Internet of Things (IoT) sensor network that will help build a hyper-local map of air pollution in London.

Greentomatocars operates daily in London. Its vehicles will be installed with Drayson Technologies’ CleanSpace Tag, an air pollution smart sensor. The information collected during day-to-day travels will be used to create a comprehensive map of air pollution in the capital.

London breached its annual air pollution limit within just five days this year, and in January 2017 the mayor of London, Sadiq Khan, warned that London’s toxic air is a “public health emergency” just days before issuing a ‘black alert’ for air pollution levels in London. City Hall has also recently taken steps to address London’s air pollution issue with the launch of an ultra low emission zone in London from April 2019.

Greentomatocars’ company values are rooted in environmental sustainability. The partnership with Drayson Technologies will help address the severe problem faced in the capital by better equipping businesses and the public with the information they need to understand air pollution levels in London. Greentomatocars drivers will be using the sensors daily and the company will be passing on air pollution data to its customers.

The company also aims to identify vulnerable locations for air pollution exposure, such as hospitals and schools. It can issue drivers with best practice guidelines for travelling through these areas, such as switching to electric mode where possible.

Greentomatocars’ fleet of hybrid and emission free vehicles include the Toyota Mirai. The Mirai has fuel cells that use hydrogen gas to generate electricity. The only by-product is warm water vapour.

Lord Paul Drayson, chairman and CEO of Drayson Technologies, said: “Our aim at Drayson Technologies is to map the personal health space by collecting data on both the environment and health. Our collaboration with greentomatocars further strengthens our CleanSpace environmental monitoring network in London and will help us to better understand how air pollution impacts people’s health and in turn help Londoners lead healthier lives.”

Julia Thomas, managing director of greentomatocars, said: “The primary principle of our business is to make the greatest possible contribution to improving the environment. Being ethical and environmentally responsible is at the heart of our business. Our partnership with Drayson Technologies embodies greentomatocars’ values and we plan to use the pollution data collected to further enhance our environmental efficiency and to give London residents the information they need to lead healthier lives.”