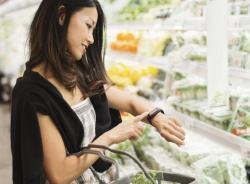 Smart watches and speakers will be the nextretail battleground, says Fastlane International

Apple Watch sales doubled last year, and smart speakers such as Amazon Echo will be a £7 billion (€8.3 billion) market within five years. But are consumers and retailers ready for the revolution in shopping habits they will bring, asks e-commerce provider Fastlane International.

Sales of smart watches such as the Apple Watch, and smart speakers such as Amazon Echo and Google Home, are booming. Household ownership of smart watches rose from 3% in 2015 to 12% in 2016; and Google Home’s launch in the UK last month fuelled a market expected to grow to £7 billion globally by 2022. It’s time for everyone to think smart, says home delivery expert Fastlane International.

Fastlane’s head of Consumer Research, David Jinks MILT, warns smart devices will transform shopping in just a few years – and retailers will have to move smartly to keep up with changing consumer habits: ‘The Apple Watch is already a boon to lazy shoppers like myself. Ocado and Just Eat apps are accessible all the time; and make it easy to book home deliveries on the go.’

But it’s not only pure-play online retailers who benefit from the new tech. Says David: ‘If it’s a local shop I’m after, clever tools like Find Near Me are great for hunting down nearby stores. And look out for Watch List; you check off the items on your list as you go, and the App even re-orders the list to follow the layout of your local supermarket next time!’

But David warns this is another reason to be concerned for the future of the High Street. ‘Online specialists and larger retailers are going to hoover up sales from stores that don’t have Apps or appear on third party ones. And next generation Apps will really have the smarts. Based on location and history, they will be able to tell an in-store customer they are passing a product they need, or a sales promotion they will be particularly interested in.’

Meanwhile Voice shopping has made smart speakers indispensable. Echo users are already well-used to asking Alexa to ‘order dog food’,etc, through Amazon Prime. This is obviously good news for Amazon but bad news for other sellers. But David points out that third party stores can literally upskill to ensure they don’t miss out.

‘Companies like Just Eat have created app-like “Skills” for the Echo to re-order takeaways. ShopSavvy even tells shoppers if a particular product is on sale at a particular store. That means if Echo users ever leave their couch again; they at least won’t have a wasted journey!’

And even Fastlane’s own partner services are in on the act. Hermes’ Skill for Alexa enables you to track a parcel easily from your arm chair; as does DPD’s new skill (launched this week in Germany) which also alerts you to the 60-minute delivery window.

David concluded: ‘Consumers and retailers are already buying, selling and shipping with these new technologies. But many retailers haven’t even produced responsive sites that work with mobile phones. Smart tech could hit many retailers where it really smarts… their bottom line.’