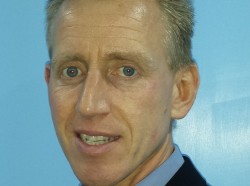 I always had my heart set on the Army Air Corps, flying helicopters … until my vertigo put paid to that.

2. If you had one business lesson to share with your younger self what would it be?

If you need to make a change, do it quickly and don’t look back – long term gain is better than short term pain.

Personally, the Nest system that I have installed at home has been amazing – a warm house and hot water when we need it and all managed from my smartphone. From a business perspective, the Lifesize Icon video conferencing room systems are now at the point where they are simply just devices connected to the internet.

It’s a massive change compared with legacy video where you needed an IT expert to deploy and set up the solution. Nowadays, they almost do it themselves in minutes. It’s more like installing an Xbox than a business tool!

People buy from people is the old saying. My travels take me through northern Europe including Scandinavia and so I’ve learned to understand and respect other countries’ ways of doing business and learn from them. The same goes for working with other organisations.

For example, some organisations are more laid back about giving their sales teams quotas and targets; you might question whether this would work, but professional pride and removing the stress seems to get good results for them. Although, if my team are reading this don’t expect anything radical!