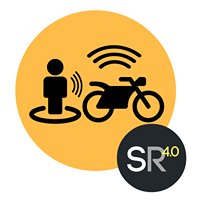 You probably remember the Ancient Silk Road from geography and history lessons at school. And you may be wondering what this has to do with the Internet of Things. Well, grab a coffee says Jeremy Cowan, and settle back for a few minutes while I tell you about two delightfully wacky modern adventurers and their very serious IoT journey along Silk Road 4.0.

The story so far…

The Ancient Silk Road flourished for more than 1,500 years from roughly 120 BC/BCE to the 1400s AD/CE. In fact, it is a series of routes, part of which (the Chang’an-Tianshan corridor of the Silk Road) was designated a World Heritage site by UNESCO in 2014.

These rough roads connected Europe and Asia, enabling the exchange of ideas, knowledge, products, and technology. I can tell, you’re starting to get the picture. As well as silks, it was used for trade in horses, spices, even Chinese crossbows.

In Spring 2018, however, it will carry two motorcycles bearing explorers Dr Philipe Reinisch and Lena Otter. The two will leave Austria bound for China, travelling for six months on a 10,000-kilometre route through Hungary, Romania, Bulgaria, Turkey, Georgia, Azerbaijan, Iran, Turkmenistan, Uzbekistan, Tajikistan, Kyrgyzstan, and Kazakhstan to China. The exact route is not fixed yet though – but their destination is: it’s Eurasia’s “Pole of Inaccessibility”, the farthest location from the sea.

Their project, called “Silkroad 4.0”, aims to revive this spirit of exchange by focusing on technology transfer and cooperation in Industry 4.0 and the Internet of Things (IoT), which they see as the next opportunity for rapid development of countries along the route.

The two motorcycles will be equipped with cutting-edge European technology and will follow the tracks of the historic Silk Road, visiting industrial and academic points of interest en route and opening doors for future business, cultural and academic alliances.

Philipe Reinisch is head of the Boteillier Group and the mastermind behind the Silkroad 4.0 Project. He holds a PhD in Industrial Engineering and has more than 15 years of experience working on a wide variety of projects, from large-scale IoT roll-outs to digital business development projects in big corporations as well as start-ups. He is fluent in German, English and Spanish, and fortunately also speaks some Mandarin.

The other explorer is Lena Otter who comes from the Netherlands and holds a BA in International Business & Management, as well as an MA in Project Management of EU Projects. She has been engaged in numerous Development & Aid Projects across the world, from Nicaragua to Cambodia. Lena is fluent in Dutch, Frisian, English, German and Spanish.

The pair will be collecting data throughout the trip via from a network of sensors. The data will be monitored, analysed and broadcast in real-time via an ‘interactive experience’.

They are being supported by two other team members, Jose Juan Lopez Ruiz and Danijel Lepir. Jose Juan Lopez Ruiz comes from Spain and is the chief architect of the Silkroad 4.0. He holds an MSc in Telecontrol, Automation and Robotics, and is in charge of design, programming and digital marketing. He is fluent in Spanish, English and German, and speaks French as well.

Danijel Lepir, a citizen of Croatia, holds a degree in Law and an MA in Project Management of EU Projects. Fluent in Croatian, English and German and using Spanish as well, he is in charge of external relations, community management and administration.

Having said all this – their home base is Vienna, Austria: the centre of Europe.

Such a clearly multicultural team demonstrates the importance of the European spirit for them, as they strongly believe in Europe as the potential centre of global innovation.

Through this platform, says Reinisch, “technology cooperation may result in new connected products that otherwise might not be created. Serving as a technology catalyst, Silkroad 4.0 brings into contact companies that want to cooperate on creating new IoT and Industry 4.0 solutions.”

The Silkroad 4.0 experience will be enhanced with the multilingual written and video content created by the two motorcycle-travelers: explanations of IoT technology used, engaging travel videos of the countries being visited, as well as interviews with the visited partners and institutions along the route.

The created videos and articles will give readers an insight into the lives of people in Europe and Asia, while at the same time describing the technology used during the trip, the impact it had on the travel itself and overall changes brought by IoT and Industry 4.0.

At the same time, this content can be a great marketing expansion tool for companies with innovative IoT solutions, as they will have the space to explain and showcase their technology within an engaging story and in the middle of stunning landscapes along the silk road.

The team believes that Europe’s future in the face of global competition lies in co-innovation, and they say this reasoning is behind their ultimate vision of “Uniting European technology moving towards a joint digital future”: the project will make use of technology from all over Europe – bringing technology together in this multilingual “edutainment” (education/entertainment) and networking project.

… Now you can support them and showcase your IoT technology

The organisers are now offering partnership opportunities – showcase your technology, make your IoT solution part of an engaging story, and build new alliances. ‘Unique’ is an over-used word, but the organisers are probably right when they say this will be a unique experience, mixing technology with adventure, and shared by constant multilingual media (and social media) coverage. Silkroad 4.0 offers a real-life demonstration, allowing for testing of the latest IoT solutions in an operative and sometimes harsh environment.

Networking for businesses will also be an essential part of this endeavour, so Silkroad 4.0 offers enterprises the opportunity to become a member of the Silkroad 4.0 Technology Circle. For details see their website (www.silkroad40.com) and contact Philipe Reinisch directly.

On May 20th, Silkroad 4.0 is officially starting the “European IoT Challenge”. Reinisch says, “SilkRoad 4.0 seeks to identify, promote and showcase IoT devices or mobile applications. It can be new, commercially viable solutions but also prototypes that are already working and are in need of some additional awareness. The solutions will help enhance the experience of a long-distance motorcycle trip in terms of planning, efficiency, comfort, maintenance, filming – or simply fun.

For that purpose, they are calling for Makers, Academia, Start-ups or Enterprises from all over Europe which have Internet of Things solutions that when chosen as a finalist, will be used, tested and showcased along the ancient silk road route.

Another initiative will come later this year in August-September. It is a 6-8 weeks trip across Europe where they will visit European makers, companies, and other European IoT stakeholders directly in their home countries.

In order to give their technology partners the chance to connect with one another, they are even considering a Silkroad 4.0 Stakeholder Conference, including a VIP networking dinner. This is planned for winter 2017-’18.

In spring 2018 they will leave for their six-month Eurasian trip from Austria to China, with an expected completion date in November 2018.

Finally, are there any plans after November 2018? Stay tuned! Even more surprises lie ahead!

Sound interesting to you? Well, you can show your support for the Silkroad 4.0 team by engaging with them through their social media profiles (Twitter: @silkroad_40 and Facebook: /silkroad40) or, for those interested in extra details, subscribing to their newsletter.

Objectives of the European Pre-Tour in 2017

IoT Now will be reporting on Silkroad 4.0’s travels, adventures, IoT technologies, and connections with industry and academia.

For the latest updates or to find out more, visit: www.silkroad40.com
The author of this articles is Jeremy Cowan, editorial director of IoT Now.
Comment on this article below or via Twitter: @IoTNow_ OR @jcIoTnow