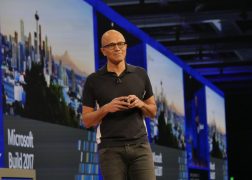 “In a world of near infinite compute power and an exponential growth in data, we are focused on empowering every developer to build applications for this new era of intelligent cloud and intelligent edge,” said Satya Nadella, CEO, Microsoft.

A vision for more intelligence — from the cloud to the edge

Our world is overloaded with information, every minute, and yet it is in this very information — data — that opportunities and insights abound. To help customers realise these opportunities, Microsoft shared an early peek into innovations it is bringing to bear to help every person and organisation achieve more. In support of this vision Microsoft announced the following:

The cloud for every developer, and tooling to target any platform and device

Microsoft says it is meeting developers where they are, and helping them be more successful, with new Microsoft Azure and Visual Studio services and tools to help modernise existing applications and quickly build intelligent apps for all major platforms: