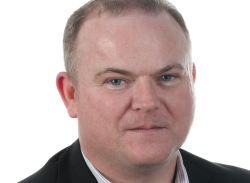 Peter Pugh-Jones, head of technology, SAS UK & Ireland says, Just because you can solve a problem with tech doesn’t always mean you should.

I wanted to be an actor. I was totally obsessed with Richard Burton’s, James Mason’s and Vincent Price’s speaking voices and often tried to emulate them. I also loved the ‘Six Million Dollar Man’ and very often bionic-ally walked around the playground claiming to all that would bother to listen that I had a bionic eye. My wife and daughter blame that TV show for the beginnings of my life-long obsession with software and computing, gadgets, IoT and AI (well, that and Blake7).

2. If you had a business lesson to share with your younger self what would it be?

With technology anything is possible, but just because you can solve a problem with it doesn’t always mean you should (Sinclair C5, for example).

3. Which IoT use case has recently fired your imagination?

There are many favourites I cannot talk about currently, but one I can discuss is the Smart Grid project SAS worked on with Duke Energy in North Carolina to use analytics in helping forecast and predict electricity distribution requirements, power outages and optimisation of personnel being sent to critical incidents.

It’s mostly my favourite though because it involves use of an innovative device called a PMU (Phasor Measurement Unit) which of course sounds like it’s come from Star Trek.

I have been very lucky to spend a great deal of time living (as a child) and later working in amazing places all around the world. The most fundamental lessons of all are that strategically deploying a smile and always being polite, costs very little in effort but can transcend just about any cultural or language barrier you might encounter.

(That, and the words ‘Beer’ and ‘Disney’ are almost universally understood, even if the native language has a different official word available.)