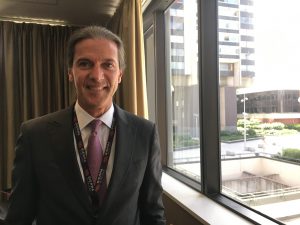 At a recent US conference a speaker from Deloitte suggested that these days the Internet of Thing (IoT) demands that providers are ready to “Thing big, Start small, Scale fast”. Someone at the US event had added that enablers and IoT service providers should be ready to fail fast.

Now, I appreciate that Americans have always had a more robust attitude to entrepreneurial failure than some of their European cousins, believing that the best entrepreneurs have a disaster or two under their belt from which they have learned well. But your correspondent has been wondering since then if this readiness to embrace and learn from failure is being taken too far.

Speaking of success and failure in the opening Plenary session in Paris this morning, CTO Philippe Guillemette shows that the average company lifespan on Standard & Poor (S&P’s) 500 Index has fallen from 60 years in 1960 to 14 years in 2010 and may fall further soon. “It’s not a bad thing,” he says. “You just have to adapt faster than before.”

The Sierra Wireless meeting in Paris gives me the chance to ask Argentine-born CMO and occasional winemaker René Link for his opinion. “There’s nothing pessimistic about ‘failing fast. Using the new mangOH(TM) Red open source platform (Also see: Credit card-sized mangOH Red open source platform offers IoT developers interoperable building blocks.) you can do trial and error in a much faster way. You get to your clients’ desired solution much faster.”

A lot of businesses are about scale, he adds. “We’re shipping 17 million modules a year – that is scale. (IoT users) are building new revenue streams that can balance revenues that are declining. Some industrial companies have been doing business the same way for 60-70 years. IoT is an opportunity for them to modernise, and digitise and do it at scale.”

Could he give an example of this modernisation?

“Yes, think of Marriott (hotels),” Link replies. “If an elevator breaks down it can take 20 minutes to leave the building in the morning, making you late for appointments. Imagine a day when elevators no longer fail, when manufacturers like OTIS can use predictive analytics to see when an elevator may fail. Think of a network operations centre (NOC) where elevators around the region are flashing yellow on screen if they are warning of potential failure.

“Imagine if Marriott could say their elevators never fail. As a road warrior, I’d go there. Retro-fitting the capability with better maintenance programmes and fewer truck rolls, well it all ties together,” Link adds. “It’s all about understanding the customer’s pain point.”

Are customers sometimes unaware of what IoT could do for them, IoT Now asks.

René Link nods. “Steve Jobs (of Apple fame) knew what the world needed before the world knew. We should help define what the customer wants. And in IoT the customer doesn’t always know what business model is available to them because it’s complex.”

Link believes that a lot of industrial companies could use IoT to get out of the analogue mindset. “It helps them modernise.”

Does this mean that exponents of the Internet ofThings who talk to each other are just preaching to the converted? How should we as an industry reach more corporate end users?

“That’s where trusted partnerships with the likes of PwC Canada come in,” Link maintains. Access to the C-suite (chief executive officers, chief technology officers, etc. Ed.) is vital. They can open doors that we don’t have access to. In return, we can help CxOs envision what IoT can do for them. We are a channel for each other.

“It’s also important to pitch technology AND business. Technology pitches mean the CEO will transfer it straight to the CTO; you need to talk both languages. I feel that IoT is an incredible wave, similar to the start of mobile communications. When you put together the three pieces, Device, Cloud and Connectivity, if you execute flawlessly in a cohesive value proposition then you have something magical,” Link concludes.