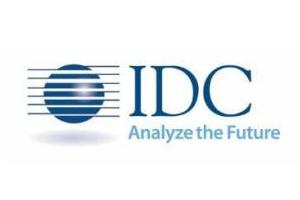 A new update of the Worldwide Semiannual Small and Medium Business Spending Guide from International Data Corporation (IDC) forecasts that total IT spending by small and medium-size businesses (SMBs) will approach $568 billion in 2017 and increase by more than $100 billion to exceed $676 billion in 2021.

With a five-year compound annual growth rate (CAGR) of 4.5%, spending by businesses with fewer than 1,000 employees on IT hardware, software, and services, including business services, is expected to be slightly stronger than IDC’s previous forecast.

SMBs around the world are increasingly interested in investing in resources to improve employee productivity and improve their competitive positions. Boggs noted that while SMBs, especially smaller ones, have immediate tactical needs to sharpen performance, they are also looking to coordinate resources in a meaningful way. For many this will be an important step towards Digital Transformation (DX).

SMBs will spread their IT investments about equally across the three major categories – hardware, software, and IT services – with these categories accounting for more than 85% of total SMB technology spending worldwide.

While hardware purchases currently represent the largest share of this spending, IDC expects 2019 to be the watershed year when software and IT services spending both surpass hardware spending. The smallest of the major categories – business services – will see the greatest spending growth of the four technology categories at 7.1% CAGR, followed closely by software (6.9% CAGR).

One third of all SMB software purchases in 2017 will be from the top 3 applications categories: enterprise resource management (ERM), customer relationship management (CRM), and content applications. Application development & deployment and system infrastructure software will also be key areas for SMB software investment.

Hardware spending will be led by purchases of PCs and peripherals, which accounted for almost half of SMB hardware spending in 2016 (49.6%) a share that will decline throughout the forecast period to 43.3%. SMB services spending is divided between IT services and business services. 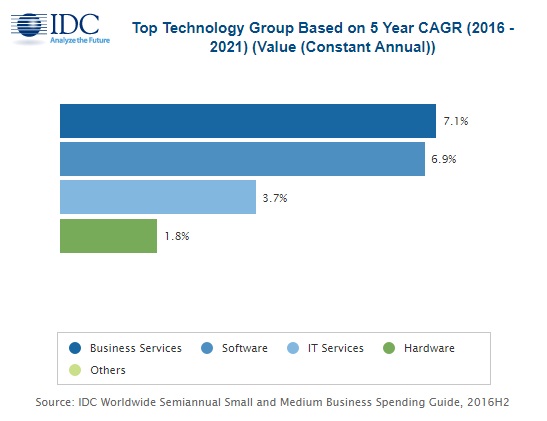 Medium-sized businesses (100-499 employees) will be the largest market throughout the 2016-2021 forecast with 38% of worldwide SMB IT products and services revenues coming from this group of companies. The remaining revenues will be generated about equally by large businesses (500-999 employees) and small businesses/small offices (1-99 employees).

Medium and large firms will also experience the strongest spending growth with CAGRs of 4.6% and 4.5% respectively, slightly above small business spending growth of 4.4% The SMB opportunity for both near-term and long-term IT spending growth extends across all company size and technology categories.

SMB IT spending by region

On a geographic basis, the United States represents the largest market with SMB IT spending expected to total $171.3 billion in 2017. North America in total will account for about one third of worldwide SMB IT spending throughout the forecast period.

“The Western European SMB market is big and growing even if European SMBs traditionally show a lower level of IT sophistication than their bigger counterparts and therefore they can represent a difficult target market. In this context we see today the rise of SMBs that were born in the digital era, that are very innovative and attracted by 3rd Platform and Innovation Accelerators (particularly cloud, mobility, and IoT).

Even if these companies represent only a small percentage of the overall SMB market, they can set the scene and pave the way to a broader adoption of innovative IT solutions,” said Angela Vacca, senior research manager, Customer Insights & Analysis.