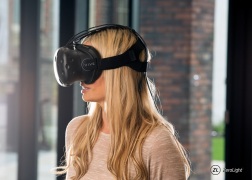 In a new poll of 1,000 car buyers across Europe, 89% of the total sample revealed that they would be more likely to proceed to purchase the vehicle after exploring and customising its features using virtual reality (VR), 44% of those stated that they would be ‘very likely’ to do so.

The study also revealed that 25% of consumers expect that VR will be the primary method of being able to customise a new car by 2027.

The statistics point to a shift in traditional consumer buying habits, with modern day buyers revealing that having access to the latest technology in a dealership would make them more likely to part with their cash and increase brand loyalty.

In the survey, 79% said that being offered a high-quality VR experience in a dealership would directly influence their perception of brand quality overall, 50% also revealed that it would make them more likely to view other vehicles in the range.

Unsurprisingly perhaps, it was the younger generation that admitted they would be ‘more likely’ to purchase a car if given the opportunity to view it in a range of urban and scenic environments using technology, with 84% of 25-34-year-olds across UK, Spain, Germany, France and Italy all in agreement with this statement.

Meanwhile, 25% of consumers expect immersive technologies to be the primary method of customising a new car by 2027, with 59% stating it would play an important role alongside other technologies.

The survey also found that younger car buyers from these five largest European economies had the highest level of expectation when it came to customising their new car. An overwhelming 93% of 25-34-year-olds expected to be able to see design options and select preferences of the car in detail prior to purchase.

Artgole explained, “Fully immersive, 1:1 experiences increase footfall by giving customers more freedom and flexibility to see and customise their car – making it easier for them to discover their dream vehicle from the very first interaction.”