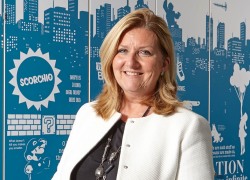 Telensa, the provider of connected street lighting and Smart City applications, announced the appointment of Sue Thexton as chief sales officer (CSO).Sue has a proven track record of growing businesses internationally, and will take command of Telensa’s global sales organisation as it ramps to meet accelerating demand for its Smart City applications.

“I’m excited to be joining Telensa at such a critical point in its growth strategy,” said Sue Thexton, chief sales officer at Telensa. “With a strong foundation as the leader by market share in street lighting networks and with many innovations in the pipeline, Telensa is well-placed to capitalise on the huge growth in Smart City projects worldwide.”

“Sue brings deep commercial and leadership experience in applications, and I’m delighted she is joining us now, as we build Telensa’s commercial momentum and expand our range of Smart City applications,” said Will Gibson, chief commercial officer at Telensa.

“Telensa has a unique formula for delivering Smart City applications with the scale and affordability that cities need,” said Will Franks, chief executive officer at Telensa. “Sue will play a key role in realising our company’s commercial potential.”